With the demise of the Clandestine Cake Club - which I think is continuing as just a Facebook page - a few of the local members decided to try and keep a group going on our own. For our first meeting I decided to stick to a familiar recipe rather than experiment. Now that we are no longer bound by CCC rules of large cakes only, and as the attendance wasn't going to be huge, I decided to make a traybake of shortbread squares filled with a fudgy layer of salted caramel and chocolate, following  this recipe which I have used before. Using this recipe also meant that any leftovers would keep for longer than a cake would - I already have too much cake in the freezer! 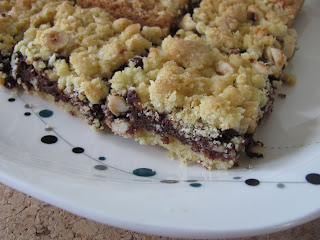 I followed the recipe exactly as written in the link above, so no need to write it out again. In the end, there were only a few pieces left for me to bring home, but they were as delicious as the first time round!

Edited to add that this recipe went to June's We Should Cocoa link-up, at Tin and Thyme.
Posted by Suelle at 16:50

Sad to hear of the demise of the CCC. There wasn’t one in this area, This sounds just the right thing to make next week for our Mums at Tits group. Looks delicious.

This sounds good. Lovely flavours.Am sorry to hear about the demise of the CCC. Sadly we haven't had a local one to join. Glad your group is carrying on.

It's rather sad about the demise of CCC. having said that the Cornwall one packed up a few years ago and I never got around to going to the one here in the New Forest before the e-mail came.

I bet your traybake was really popular. I'm not sure they'd have been many leftovers if I'd been around. I'm a complete sucker for salted caramel anything. It's lovely to have you join in with #WeShouldCocoa again. I've missed your entries.