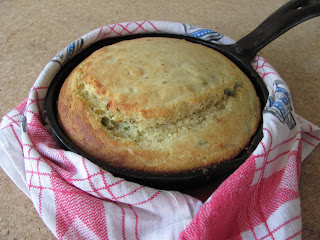 I was in a baking mood, but couldn't really justify baking a cake when I'd got a dozen or more individual portions of cake from previous bakes laying in the freezer. Cornbread to accompany my planned batch of chilli seemed a good idea - I could satisfy my urge to bake and sort out several evening meals in one go without feeling guilty; some sort of carbohydrate was needed and it would be a tasty change from rice. 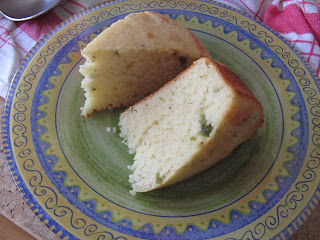 I used this recipe by Ben Mims, which has been the most successful recipe of several I've tried previously and one that Southern Living calls perfect. As I only wanted a few portions, I halved the recipe and baked it in my small cast iron skillet, which is only 16cm in diameter at the top. From previous attempts I knew that I was happier with a bit more seasoning and a tiny touch of sugar, so I added 10g of caster sugar, a teaspoon of dried oregano, a good twist of black pepper and a tablespoon of finely chopped pickled jalapeno peppers. 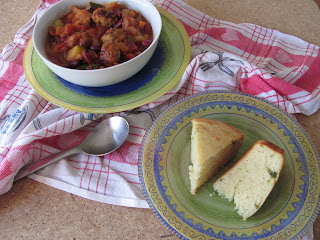 I think this was the best cornbread I've made so far; the texture was just what I wanted - moist but not too stodgy, but not too crumbly either. The added ingredients stopped it being bland and there were just the right amount of jalapenos to give a spicy kick, without becoming too hot. It went really well with my inauthentic chilli, which contained pork meatballs and a courgette I picked on the edge of turning to a marrow!
Posted by Suelle at 11:44

I haven't made cornbread for quite a while and you've made me realise the error of my ways. This does sound like a very good recipe. I just need to get around to making the chilli and, funnily enough, I happen to have some overgrown courgettes.

I've never made cornbread, but like the sound of this one.