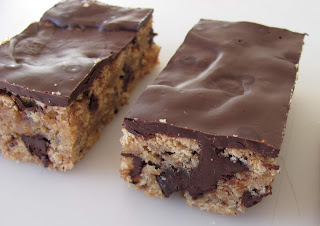 It's over eight years since I last wrote about these Chocolate Peanut Buddy Bars, but I can't believe that I haven't made them in the intervening period. It's possible, of course - daughter has a peanut allergy, so I wouldn't have baked them while she was living here, and I cut down on the amount of baking I've been doing when my son first moved out in 2012.

Either way, they popped into my mind again when trying to decide what to make for the weekend. I wanted something that would get me through the start of the week too, when I don't have time to bake. These seemed ideal as the 30 x 20cm traybake cuts into around 24 pieces. I use a baking tin that is slightly smaller than specified in the American recipe (8 x 12" instead of 9 x 13") as that's the size of tray I have; I think standard sizes are slightly different in the USA. I added another 5 minutes to the baking time to compensate for a deeper mixture. 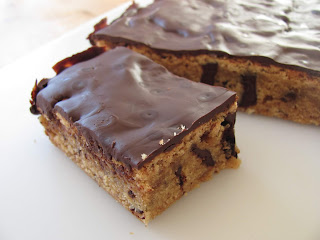 The only other change I make to the recipe is to use plain chocolate - about 70% - as it does cut through the sweetness of the cookie bars and gives a stronger chocolate flavour. In this blog post I've 'translated' the cup volumes to metric weights, with 150g of chocolate going into the bars, and 200g being used for the topping.

Unfortunately, I must have covered the bars before they were completely cold - when I went back the next morning to photograph them, the top was covered with little pock marks, which I can only assume was condensation dripping from the aluminium foil covering the tray overnight. It didn't affect the flavour, but did spoil the photos a bit.