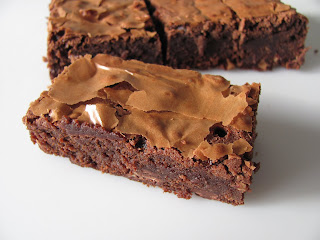 After deciding to make brownies, I realised I didn't have enough butter, so went back to the oil-based recipe I used to use frequently when my son was on a low saturated fat diet. It's not as rich as a butter-based recipe, but it's not bad at all. I added 100g of  dark chocolate with orange and almond pieces to give more interest to both the flavour and texture.

The recipe is based on this one, from Cookie Madness, although I make it half as big again to make deeper brownies, and use sunflower oil rather than olive oil, as well as changing the add-ins. I have tried olive oil, and although it adds an interesting dimension, it's not a flavour I want every time I bake them, so I find a more neutral oil is better on most occasions. 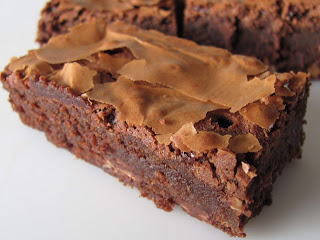 Method
Pre-heat the oven to 180C and line a 20cm square baking tin with parchment.
Melt the chocolate in a bowl over simmering water, then remove from the heat and whisk in the oil.
In a large bowl, whisk the eggs, sugars and vanilla for 5 minutes, then fold in the chocolate and oil mixture.
Sift the flour over the batter, and fold in, followed by the chopped chocolate.
Transfer the batter to the baking tin, then bake for 25 minutes.
Cool in the tin, then cut into squares or bars.
Posted by Suelle at 08:29

Your original brownie recipe is my favourite one always. Will try these - sound delicious.

They aren't as rich as my recipe with butter, but a reasonable substitute, when necessary.