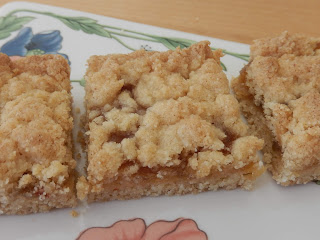 I was tempted by a jar of marmalade in one of our local independent delicatessens  - blood orange, lime and chilli - but was quite disappointed when I tried it.

The fruit content wasn't very high (I know I should have checked before buying, but for what I paid I expected more) and the peel had been diced rather than shredded. On top of that the chilli flavour wasn't really noticeable either. However, it was too expensive to waste, so I decided to incorporate it into one of my favourite cookie bar recipes.

These shortbread squares are as near perfection as it's possible to get, I think. They are buttery, melt-in-the-mouth crumbly, yet still crisp (and they stay crisp, even after several days, which is quite a feat with a moist filling).

The original recipe is from Sue Lawrence's 'On Baking' , and used a filling of dates and currants cooked with ginger, honey and lemon juice to give a thick pulpy filling. I kept the shortbread layers exactly as they are in the recipe, and used 250g of marmalade for the filling. 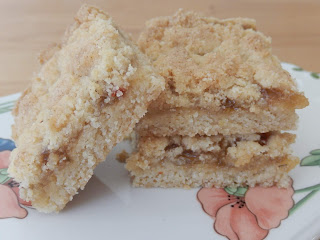 Method
Pre-heat the oven to 190C (170C fan), and line a 20cm square baking tin with a piece of baking parchment.
Put the flour and semolina into a bowl. Warm the butter and sugar together in a small saucepan until the butter has melted and the sugar is dissolved. Pour onto the flour mixture and combine thoroughly to give a wet sticky dough.
Warm the marmalade slightly, so that it is spreadable (I  put it in a small bowl in the microwave, for just a few seconds).
Put 2/3 of the dough into the baking tin and spread evenly over the base, pressing down firmly. Spread over the marmalade, leaving a 1cm margin around the edges.
Crumble the rest of the dough over the top, aiming for a fairly even distribution, and press down lightly just to make sure it sticks. There won't be enough to completely cover the surface but that doesn't matter - it will spread as it bakes, and a few gaps look attractive anyway.
Bake for 25 minutes, by which time it should be golden brown. Cut into squares immediately, but leave in the tin to get completely cold before removing - the shortbreads are too fragile to move while warm. 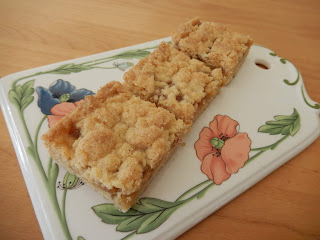 These were delicious! This shortbread recipe isn't over-sweet, so the biscuit layers were a nice contrast to the amount of sugar in the marmalade. The marmalade, although heavy in sugar, also had a pleasing sharpness to it's flavour so the whole thing was nicely balanced.

The possible variations on this recipe are as wide as your imagination - I've used jam, mincemeat, chocolate spread (with and without added caramel) other dried fruits (chopped and cooked with a little liquid until soft and pulpy) and have added chopped nuts and marzipan to the top layer of shortbread. I haven't tried fresh fruit yet - I think many fruits would be too wet for the shortbread to stay crisp, but pre-cooked and drained apples or pears might work.
Posted by Suelle at 08:02

Your experience shows that not all artisan products are necessarily better than the everyday supermarket alternatives and often not value for money. When you get a good one it's brilliant but there's a lot of mediocre stuff masquerading as superior produce.
The squares look and sound delicious.