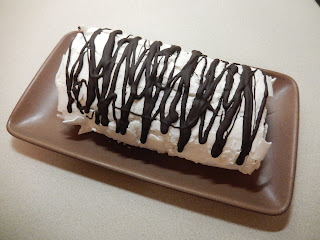 I made two desserts for the Christmas period, as something chocolate is obligatory, but my daughter had also asked for a repeat of Dan Lepard's Mont Blanc Layer Cake.

The Mont Blanc Layer Cake recipe, based on meringue, is far too big for just three of us, particularly as it doesn't keep well, so I made a meringue roulade with only 3 egg whites, filled it with a half quantity of the chestnut and ricotta cream and drizzled melted chocolate over the top. 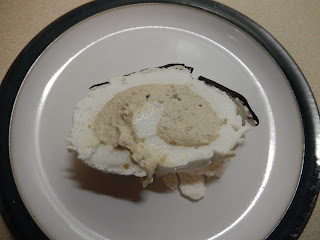 We decided, on trying the dessert, that although it was delicious, we all preferred the crisper meringue of the original recipe, which gives a better textural contrast with the chestnut cream than the soft meringue of the roulade. 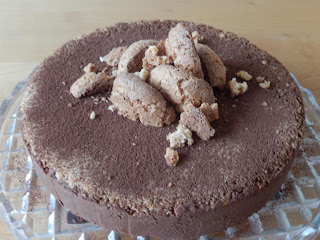 For  the chocolate dessert, I made a half-sized quantity of Delia Smith's Chocolate Truffle Torte, which fitted nicely into a 7" (18cm) shallow cake tin. The only departure from the recipe was to use Amaretto liqueur instead of rum.

My daughter also contributed a batch of mince pies, which has become a tradition now. She uses this Mary Berry recipe, which adds dried apricots to the mincemeat and tops the tarts with grated marzipan.
Posted by Suelle at 16:48

It all sounds delicious. I love the Delia torte and yours is such a good idea to halve the recipe. A Happy New year.