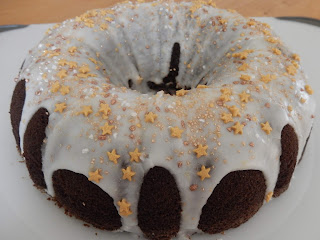 Wow! I wish I'd tried this Nigella Lawson recipe for a Cider and 5-Spice Bundt cake years ago.  It was superb!

I tried a scaled down version of the recipe, one Christmas a few years ago, but used a different spice mix and ginger wine instead of cider. So I knew the recipe worked, but had no idea what the impact of using 5-Spice would be.

Nigella originally called this a Cider and 5-Spice Gingerbread, but changed the name because the ginger element (fresh root ginger) isn't particularly strong. The method of making the cake is essentially that of a gingerbread - combine sugar with the wet ingredients, then mix in the remaining dry ingredients - but because oil is used rather than butter, there's no melting or other heating involved.

Once the ingredients were weighed and measured out, the cake was really quick to put together. The most time consuming operation was grating the lump of root ginger! 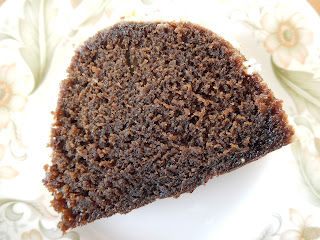 The recipe I have seems to have originated from the 2014 GBBO winner, Nancy Birtwhistle. However I can't find it on her website, only on a few twitter videos.  There is something about it here, but basically, it's equal parts of Trex (white hard vegetable fat), plain flour and vegetable oil. I made up a small batch, using 50g of each of Trex and flour, and 50mls of sunflower oil, which is going to be enough for several cakes. It keeps in a jar in the fridge until the shortest 'best before' date of the products you've used (or use your nose - fat that has gone rancid won't smell very good).

I allowed it to warm up a little before use, and it was then easy to brush onto the bundt tin with a pastry brush. I think it works better than the commercial spray, probably because you can easily see if you've missed any areas, and can also put on a thicker layer if you've any doubts. My cake just plopped out without any assistance from me, after about 15 minutes cooling in the tin. 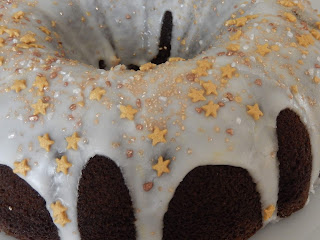 Because I was taking the cake to my local Cake Club (a legacy from the now defunct Clandestine Cake Club meetings), and the theme was Festive/New Year, I prettied up the cake with a lemon glacé icing and some sparkly sprinkles on top, but I wouldn't usually bother with anything more than a dusting of icing sugar.

The cake had a lovely close-textured but light crumb and  the 5-spice gave a unique flavour which emphasised the aniseed elements of the mixture - I used Bart brand which contained, in decreasing order, star anise, cassia, fennel,cloves and ginger - and the nutmeg. It was a very tasty alternative to a traditional gingerbread. Although it was an optional extra, the lemon glacé icing was a good contrast to the spice - Nigella says she likes this cake with a salted caramel sauce, but I think that would be too rich, and sweet, for me.
Posted by Suelle at 13:32

Have made this cake and it is delicious. Yours looks great.

This is a cake which I would enjoy making and eating! Thanks for the tip about greasing the tin.

That cake release recipe is a godsend, it works really well.
I have been hankering after making this cake for ages, ever since it first appeared on TV when the series was shown. Now I simply must just do it! It looks lovely.

Lovely cake. Cider cakes seem to be rare beasts these days although I remember eating plenty in days long gone. It's time for a revival. I've found that the best way to grate ginger is to get someone else to do it for you. Sadly that doesn't always work.