The only time I get to make a large cake these days is if I can bake for someone else. At the end of last year I joined the Friends of my local Library, and had been baking for their monthly coffee mornings. That's all on hold for the moment, of course, with Libraries closed and no mass gatherings taking place because of the Covid-19 pandemic. 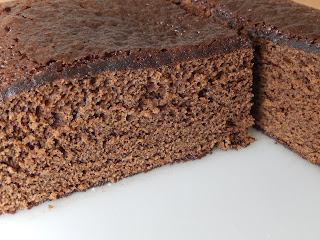 Because so little is known about this particular virus, or what are the most effective ways of staying safe, I've been sewing face-masks for me and my two children, in case they are eventually needed (even though I don't really think much of the efficiency of home made ones). I decided that when I delivered their masks to them, I could include some cake, to cheer them up a bit in their isolation.

It was hard to decide what to make, as the three of us have very different tastes, but eventually I decided on gingerbread. 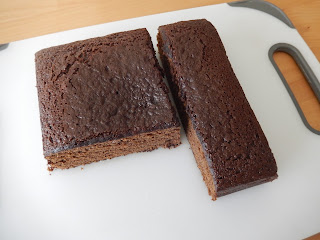 I used this oil-based gingerbread recipe, rather than the best traditional recipe I have, because I didn't want to open a litre of milk just for the small amount that was needed for the cake. The oil-based recipe is very similar to the traditional recipe - it gets a nice sticky top after a few days - but isn't quite as rich as it has less fat and fewer eggs. Using oil, and water instead of milk, has the added advantage of making the cake dairy-free too.

The bottom photo shows the 20cm square cake divided for sharing. As you can see, the three of us vary in how much cake we can eat over a few days; the biggest portion was for my son and the smallest (missing) portion was for my daughter. I was left with the long narrow piece - it  made a delicious dessert when reheated and served with rhubarb roasted with ginger, and natural yogurt.
Posted by Suelle at 15:13