Winter has come early this year, with sub-zero temperatures here and snow in many other parts of the country. It's very rare for this to happen before late December, or even January. Here is one of the joys of winter - not feeling guilty about the occasional hot, calorific pudding! Sticky toffee pudding could even make you feel almost virtuous, as puréed dates replace some of the fat in the pudding itself. If you are restrained with the toffee sauce and cream (HA HA!) then it's not so bad. ;)

The original of this recipe made seven individual puddings, but I bake it in one 9" square dish and get at least 9 servings from it - which brings me to the other great feature of this pudding - it reheats beautifully, either in the oven or as individual portions in the microwave. This recipe was once online, on the GoodFood site, under the name The Ultimate Sticky Toffee Pudding, and I think it is published in The Ultimate Recipe Book from GoodFood. I've made a couple of small changes in both the method and ingredients, but want to acknowledge the original. 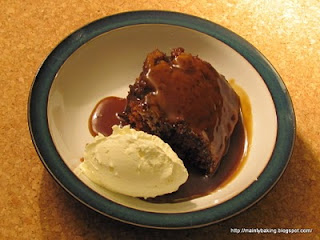 225ml double cream
1 tablespoon black treacle
Method
Cut the dates into halves (a good way of checking for missed stones) and place in a small bowl. Add the tea bag and the boiling water. After ten minutes, remove the tea bag, but leave the dates soaking until cold - most of the liquid will be absorbed. Whizz briefly in a blender or mini-chopper to give a coarse purée.
Preheat the oven to 180C and grease a 9" square baking dish which is at least 2" deep. Mix the flour and bicarbonate of soda together. Beat eggs in small bowl.
Beat the butter, sugar, black treacle and vanilla extract together. Add the eggs in three portions, together with a teaspoon of flour with each portion, and beat until well mixed. Fold in the rest of the flour alternately with the milk, then stir in the date purée. Transfer the batter to the prepared baking dish and bake for 40-45 minutes until well risen and firm (a probe should come out clean).


Meanwhile make the toffee sauce by bringing the sugar, butter, and half of the cream to the boil, in a small saucepan, stirring continuously. When boiling, add the treacle and cook for a few minutes, until it begins to thicken. Remove from the heat and beat in the rest of the cream.
When the pudding is cooked, prick all over with a cocktail stick and pour over about 1/3 of the sauce. The pudding can be served immediately with extra sauce poured over, and with cream or custard.  It will also reheat well if required, as will the extra toffee sauce. I reheat individual portions of the pudding for about 45 seconds in the microwave and reheat the sauce in 30 second bursts until it is hot and runny again.
This pudding is surprisingly light, and the dates melt into the texture of the sponge, unless you have left any really large chunks when puréeing. The addition of black treacle to both the pudding batter and toffee sauce cuts through the sweetness so that it's not too sickly.
The photo doesn't do this justice - I don't have the best equipment for taking photographs with no natural light, for one thing. It's also not a pretty dessert when made in one dish.
Posted by Suelle at 20:56

I think I must be looking at a different picture to you Suelle - I think it looks amazingly fabulous! I don't think it looks unattractive in the slightest and would be round like a shot if I lived closer (and if you'd have me!). Is that ice-cream or creme fraiche? Either way, it looks superb.

Thank you for reminding me about this book - I think I probably still have the original magazines from when the series was first published too!

Its been snowing in Edinburgh (on and off) for two days now, very pretty! I love the snow lol. And I totally agree, winter does mean you can enjoy the finer things in life like calories galore ;0)

The sticky toffee pudding looks lovely - I mostly make mine as a whole pudding and then cut it into squares too.

Thanks, C. I'm never very happy with photographs when I've had to use the flash, as I know what they look like in real life!

The accompaniment was double cream whipped with vanilla and a little sugar - I just happened to get a neat blob.

this looks like a great sticky toffee pudding... i'm thinking of making this for Christmas Day pudding believe it or not because all the family love it so much!

I've made this recipe - the results can be described in one word: awesome!

Dom - I think all my family would prefer sticky toffee pudding to a traditional Christmas pudding too! The Three Chimney's Hot Marmalade Pudding is another winner.

CC - awesome is the right word!

This seriously looks way too good. My family are huge fans of sticky puddings (eg. date pudding or caramel) so I'm sure this would go down very well with them. Perfect for the festive season too!

Oh no! Not another Sticky Toffee Pudding I have to try . . .

Suelle, adding tea is an interesting twist to sticky toffee pudding which I've not come across before. I've only ever made it as a whole pudding. You're photo looks fine, it certainly makes me wish I had a bowl of it for supper tonight.

Suelle, serendipitously, I found a bag of dates in the fridge which need using up! Thanks for this recipe, I made sticky date pudding (as we call it) once years ago, but have long since lost the recipe, and anyway, yours looks much better! :)

It looks so good - just the right thing for this cold weather.