The unfortunate thing about the lovely recipe for brownies made with mayonnaise is that it needs just two tablespoons of buttermilk  (or 4 if you make a double batch, as I did last week), leaving almost a whole carton to be used up elsewhere. As I also had several oranges reaching the point where they needed using, an orange and buttermilk cake seemed a good idea. It took a while to find a recipe which also used oil, but in the end, I settled for this recipe which was simple to make - the only changes I made was to use the zest of two oranges (but the juice from only one), and to use about 50ml of natural yogurt to make the buttermilk up to the correct volume. 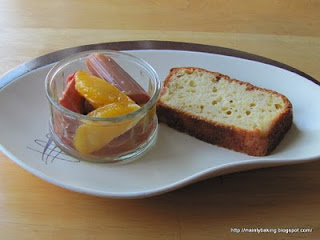 ﻿
The cake took a few minutes longer than specified to appear fully cooked, but unfortunately it still sank dramatically as it cooled. I'm not sure if it was underbaked or overmixed, but there was a dense layer where  the cake had collapsed and it had a rubbery texture which wasn't very pleasant for a cake.  However, it made a tasty dessert with the first of the rhubarb from the garden mixed with some sliced oranges, and a spoonful of Greek yogurt. Not a cake recipe to keep though!
Posted by Suelle at 08:44

Love the serving dish, and at least you managed to salvage the cake as a dessert.

Things would have to be really bad to be wasted here, C! ;)

That's a shame Suelle, because the flavours sound delicious. Rubbery doesn't sound quite so appetising though ;-)