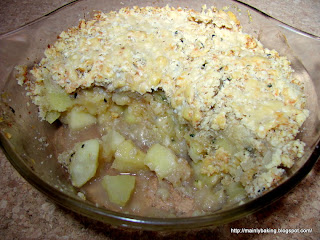 This recipe, from Nigel Slater, is fast becoming a family favourite. It sounds strange, and it sounds as if it shouldn't work, but it makes a really tasty accompaniment to sausages.

The recipe comes from Nigel's most recent TV series, Simple Cooking and sums up the philosophy of the series, by using seasonal ingredients and not fussing too much about complicated recipes - just experiment with what you have available, and don't be afraid to try new flavour combinations.

I make quite a bit of adjustment to the recipe, to make this for three of us. I reduce the apples to four  or five, depending on their size, but reduce the crumble recipe by half. The first time I made it according to the recipe and it felt unbalanced - far too much crumble mixture.

I don't have madeira in the storecupboard, but I've found that adding a tablespoon of balsamic vinegar to  the apples enriches the flavour. I also make sure one of the apples I use is a Bramley cooking apple, so that the apple mixture is not too sweet. Today's apples were the Bramley, a Braeburn, a Jazz and two small Coxes. This time, I only had ordinary thyme to add, but it still tasted fine.

As well as this crumble, we ate broccoli and sweet potato wedges with our sausages. A lovely plate of comfort food!
Posted by Suelle at 19:53

It does look good. I like the idea of a savoury crumble, but can't quite get my head around apples in it!

It does take a certain leap of faith, C!

Definitely sounds like a plate of comfort food! I'll have to try savoury crumble one day .. I suppose its not far off from a pie!

what nice look this!! gloria

Savoury apple crumble? Wow, that's a new one to me, but if Nigel Slater wrote the recipe, and you've recommended it, then it must be good.. :)