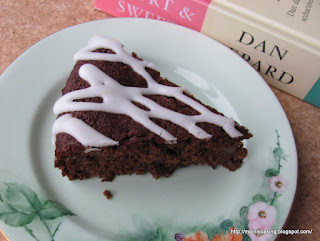 CT has claimed not to like carrot cake from childhood, but FB loves it. Whenever I baked a carrot cake for her, CT steadfastly refused to eat any - he's not one to let his prejudices go easily. So it was with a little trepidation that I decided to bake this cake; I guess I hoped that the ginger flavour and dark colour of the batter would at least hide the vegetable until CT had tasted it without knowing what was there. That idea would have worked better if I hadn't teased him about a secret ingredient which I would reveal after he had tasted it - his first guess, even before tasting, was 'some sort of vegetable' so I had to tell him it contained parsnips. To his credit, as he doesn't even eat parsnips as a vegetable, he tried the cake and fortunately he liked it!

As I expected, this was a ginger cake with added root vegetables, not a carrot cake with other root vegetables as a substitute. The cake was moist and dark - just how a gingerbread should be - and there were no visible signs of the grated vegetable. It was also surprisingly light, considering I used strong wholemeal flour! The recipe, published in the Guardian, but also in Dan Lepard's recently published book 'Short and Sweet', suggests that parsnips, swede or turnips can be used, and that each vegetable will give a characteristic flavour. I chose parsnips, as that was already available (and needed using up) - this recipe used one large parsnip. I'm not sure I would have described the flavour as reminiscent of hazelnuts though! 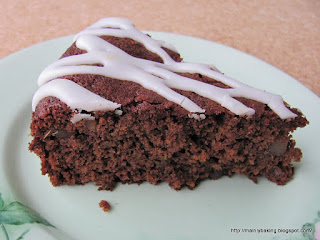 The recipe was quite straightforward to follow. One tip, which you probably all know anyway, is if the recipe calls for beaten egg whites, do that first, as you can then beat the rest of the cake without washing the beaters. If you beat the cake batter first, you have to be scrupulous about cleaning the beaters before you can tackle the egg whites.

My only mistake was to use a cake tin bigger than the one stipulated in the recipe - I just picked it out of the cupboard without thinking enough, and it was a 9" tin rather than an 8" one. I  didn't even realise until the cake was halfway through cooking and I noticed it didn't seem to be rising much! Being a shallower cake, it cooked in the minimum time rather than needing the full time suggested.

When the cake was cooled, I finished off with a drizzle of lemon water icing, made with lemon zest and juice. This proved to be the only cause of dissension - Hubs would have liked a full coating of lemon icing, as he didn't think the flavour was strong enough, but FB didn't like the acidity of the topping. I'll definitely be making this again, perhaps trying the swede version next time, but I think in future, I might make a frosting using some syrup from the preserved ginger jar instead of lemon.
Posted by Suelle at 08:56

Suelle mmmmmmmmmmmm looks every so tasty.

I have just taken out of oven a quick Belgian loaf got it down to a fine art now 45minutes in oven .

And I am loving the silicon cake tins they are amazing .

Delicious collection of flavours here. A group at university is actually working on a high fibre, low fat cake and they are using parsnips, with ginger and lemon too! I absolutely love the cake, and find the addition of parsnips fascinating. I would really love to see them used more frequently in desserts!

Hi I made this cake too a while ago now and it was fabulous!

This looks delicious. I love using vegetables in cake and have had great success with courgettes and beetroot. (Not at the same time !!)
I will have to give this a try as I have never used parsnips !!

I'm glad this one works so well, it's one of the next ones on my list to try. There's a turnip ear-marked for this recipe already! No, I don't know what made me buy turnip, but it'll hopefully get a happy home in here. I love the look of that crumb too. Yum.