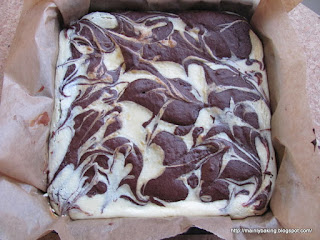 I think I've cracked the puzzle of how to make good looking Cheesecake Swirl Brownies. Previous attempts have foundered on the problem of how to get a quite thin cheesecake batter to stay in blobs on the surface of the brownie batter, and then be mixed into it in artistic swirls. The disparity between the thicknesses of the two mixtures makes this really difficult!


This time I got around the problem by putting only 3/4 of the brownie mx into the baking tin, then putting the cheesecake mix on top and allowing it to flow over the whole surface. Then the last of the brownie batter was added in 9 blobs and swirled into the cheesecake mix. This worked much better and allowed me to make some attractive looking swirls at my own pace, rather than struggling to control a cheesecake batter which just wants to run everywhere! 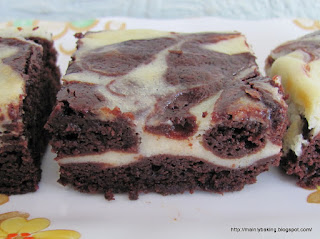 For the brownie part of the recipe I followed my favourite low saturated fat recipe from Good Food, for brownies made with mayonnaise. For the cheesecake part, I beat together 200g of full fat cream cheese, 50g caster sugar, 1 egg and a few drops of vanilla extract. I used a 20cm(8") square tin - slightly larger than specified in the recipe. Even with the extra cheesecake mixture, the brownies still cooked in 30 minutes. 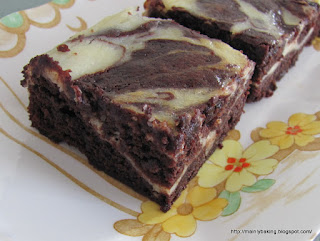 I've been using this brownie recipe for so long now, that I've almost forgotten that I really prefer a denser chewier brownie. These taste quite rich and chocolatey, and have a lovely moist texture, but they are also quite light. However, in this case, that really suited the addition of the cheesecake mixture, as it is quite light too.


The addition of cream cheese makes these brownies little higher in in saturated fat than usual, but they are still low saturated fat in comparison to other cheesecake brownies.
Posted by Suelle at 15:18

Wow, those look so delicious!

Thanks for that tip.
I haven't tried the Good Food recipe yet but this just looks too good to miss!

These look delicious! I love the swirly effect.

Yum! I bet it can be quite difficult to master the art of swirling! You've done a great job!

Genius! I would never have thought of holding back some of the brownie mixture to swirl with! I think this is definitely one of those times when perseverance has paid off - they look fabulous!

These look wonderful to me. I have tried the Good Food brownie recipe so I know what you mean about the less dense texture but I like both types - I'm so indecisive.

These look fabulous. Thanks for the tip about swirling in the cream cheese, must remember that. Your swirl came out beautifully

They look delicious, and I love the plate they're on.

These look so beautifully marbled. I must check out the Good Food recipe, thanks for the link.