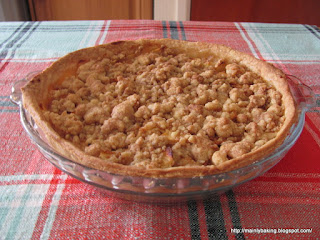 This apple pie is ideal for for picnics or other outdoor feasting, as the apple filling is baked in a sour cream custard which sets solid when cold. This makes it easy to transport, and more importantly, easy to eat, in situations where there might be no cutlery and flimsy disposable plates. There are no dripping juices or sloppy filling to fall out onto your plate, or even worse, your clothes or the floor!.

This makes it an ideal entry to the Tea Time Treats August challenge, which is for Picnic Pies. When I first saw the challenge, I had ambitions to create something savoury, and although I made a very tasty and spicy sweet potato pasty filling, the pastry itself didn't work out too well. So when I was presented with a kilo or so of windfall apples which needed using quickly, I grabbed the opportunity for a second chance at the challenge.

I don't know where this recipe came from, as I've had it written on a card in an index box file for over 30 years. I had no idea, that long ago, that one day it would be important to be able to attribute recipes! 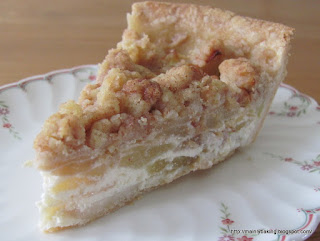 The pastry is a basic shortcrust made with 180g flour, to which I added the zest of half a lemon and one dessertspoon of sour cream from a small carton (150mls?) before using cold water as necessary to make a dough. This is used to line a 9" pie plate, and then chilled - no need to bake blind - while the filling and topping are assembled.

The filling is made by mixing the rest of the sour cream with 1 egg and a tablespoon of lemon juice, then adding sliced apples  - the recipe stated 750g of eating apples, weighed before peeling and coring, but because the apples were small, there was a disproportionate amount of peel and core, so I added a couple extra. Once the filling is in the pie case, a streusel topping made from rubbing 60g butter into 60g plain flour, 60g demerara sugar and a teaspoon of cinnamon is sprinkled over. The pie is baked at 200C for 20 minutes, then at 170C for roughly another 40 minutes, until the custard seems set. I placed the pie onto a pre-heated baking sheet, which helped the base to stay crisp.

I prefer to eat this pie at room temperature or chilled, so that the filling is set; it's delicious with creme fraiche or natural yogurt but is moist enough to be eaten on its own. The pie really needs to be made with eating apples, as there is very little added sugar (only in the stresel topping) and you need to see apple slices set in the custard when you slice the pie. I think cooking apples might make too much juice and spoil the custard.

Tea Time Treats is a monthly blogging event that requires entrants to produce something for the tea-table using the featured ingredient or style of cooking. It is hosted alternately by Karen from Lavender and Lovage and Kate from What Kate Baked.  This month, Kate chose Picnic Pies, and she will feature a round-up at the end of the month.
Posted by Suelle at 09:13

Oooh this looks lovely, I will definitely be giving this a go sometime soon. Thank you

Sour cream in the filling - that's a new idea to me, Suelle! It sounds just the thing for a picnic, as you suggest!

I love the sound of this pie. Sour cream and apple filling! yum. Will have to remember this for picnics and trips.

That looks gorgeous, and I love the idea of an apple pie you can pick up and eat without the filling coming out. As you say, perfect for a pic nic. Just need the weather for it now!

This is indeed as you say in your introduction, the perfect picnic pie- I do love an apple pie, the absolute classic pie and with a delicious topping too. Thank you for entering TTT Suelle!

Hi I'm dropping by via TTT. I love the sour cream and apple combination. What a delicious looking tart!