Well, how many ingredients used in baking begin with E? Apart from eggs, which were more or less ruled out by Ros, the host of this month's AlphaBakes challenge, unless they were the main ingredient, I could only come up with elderflowers, which are not in season at the moment. 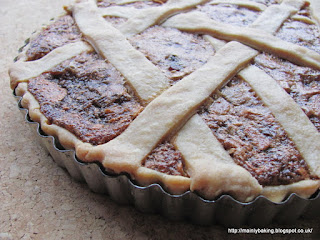 Scanning through the indexes (or indices) of all my baking books didn't get me much further. The very small 'E' sections were filled with titles such as 'easy....,' 'express....', 'everyday....' and 'extra....', which didn't really fit the brief either. Then I saw 'Eccles cakes'! Although I discarded these on the basis of being too time consuming and fiddly at the moment, especially if I made my own pastry, the word Eccles rang the bells of my memory. A Jamie Oliver recipe for Ecclefechan Tart, named after a place in Scotland, had received a lot of notice a couple of years ago, and I'd filed away the idea of it as 'interesting', in my mind. Now was the golden opportunity! 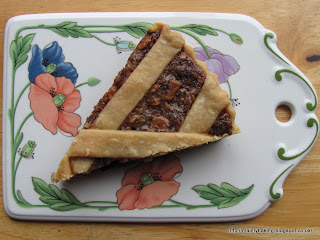 I needed some online research into the dish, as I didn't have a recipe, even in my books by Scottish cooks, such as Sue Lawrence. Along the way I discarded the Jamie Oliver recipe, as it used cream, unlike most other recipes. I wanted this to be a 'store cupboard' recipe, if I liked it, so that I could easily make it at any time. I did, however, keep his idea of baking one large tart rather than individual tartlets, and of  blind-baking the pastry case prior to adding the filling. In the end, I went with a slight adaptation of this recipe from The Great British Baking Club, although all the recipes are very similar.

I used a mix of dried fruit, including sultanas, blueberries, glacé cherries and a dried berry mix which included cranberries, more cherries and strawberries. Any large fruits were chopped smaller so that all the pieces were about the same size. I also added 35g flaked almonds, as these were the only nuts I had in stock. To freshen the flavour, I added the grated zest of a tangerine. 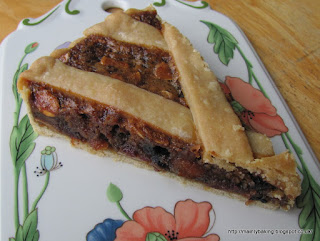 This amount of filling just fitted the 23cm shortcrust pastry case I had made, and I topped off with a decorative lattice made from the pastry offcuts. This large tart needed baking for about 30 minutes at 190C to set the filling.

I expected this to taste like a mincepie, but it was completely different. The lack of spices made the fruit taste much fresher, and the egg, sugar and butter mixture had set to a very sweet, soft paste. Although it was very sweet, I really liked the flavour and will certainly be making this again as a winter dessert. Serving it with creme fraiche would offset the richness a little. 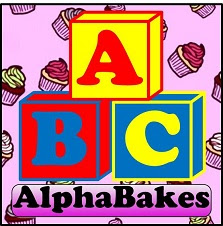 As well as it fitting the brief for this month's AlphaBakes challenge, I am also entering this Ecclefechan Tart into the Tea Time Treats February challenge, the theme of which is puddings. If the word pudding is taken in it's wider sense, as a dessert course, then a pastry based tart is surely a suitable entry?

AlphaBakes (rules here) is a challenge to bake something based on a randomly chosen letter of the alphabet. The letter can be used for either the name of the bake or one of the main ingredients. It is hosted alternately by Ros from The More Than Occasional Baker, and Caroline from Caroline Makes. Ros is this month's host, and will be doing a round-up of entries at the end of the month.

Tea Time Treats (rules here) challenges participants to produce something suitable for the tea table. It is hosted by Karen from Lavender and Lovage and Kate from What Kate Baked. This month the theme of Perfect Puddings has been chosen by Kate, who will gather all the entries into a round-up post at the end of the month.

I loved Jamie's ecclefechan tart! I did it for Christmas the other year. For this challenge I would have made an Engadiner nusstorte, which my mum did as my birthday cake a couple of times. Not so good for you though!

I've Googled the nusstorte, and some of the variations look very good, although I'm not over-keen on things that are just nut flavoured (apart from marzipan!).

Interesting recipe - it sounds really good. I've thought about making a version of this tart in the past but I've always thought that it would be just too much like a mince pie. I now see that I had that wrong.

I think this is the best "E" entry I've seend - I've never heard of this but it looks really interesting. Thanks for entering AlphaBakes.

What an interesting tart. I was thinking it must taste like a mincepie - until I read further down. Lattices look so pretty, but with my lack of prowess with pastry I find to fiddly. I was going to have a go at making Eccles cakes for this challenge, but sadly ran out of time.