My friend Foodycat mentioned on her blog recently that if she googles what she hopes is an original combination of flavours or ingredients for a dish, she invariably finds someone has already tried it, and that it came as a real surprise when she found she had thought of something unique. Well, I can honestly say that I got no results when looking for a chocolate cake flavoured with mint, lime and chilli! There were plenty of meaty marinades using mint, lime and chilli together, which convinced me that the idea might work, but it was a real leap into the unknown to use the combination in a chocolate cake. 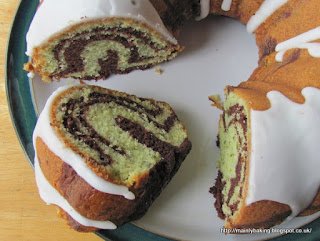 I decided that if I was making a cake which might not taste great, it would have to look good, so I returned to one of the best marble cake recipes that I've come across - this one from Alice Medrich - although I've adapted it to make a smaller cake, as in the recipe here.

For this cake, I added a 1/4 teaspoon of ground cayenne pepper to the chocolate mix, and after dividing the batter, I added 3 tablespoons of finely chopped fresh mint leaves, the grated zest of two limes and enough green colouring to give a pale green colour to the 'plain' portion of the batter. I also used sunflower oil instead of olive, as I didn't have any light olive oil to hand and I didn't want the distraction of a strongly flavoured EVOO. I added a glacé icing flavoured with lime juice to the finished cake. 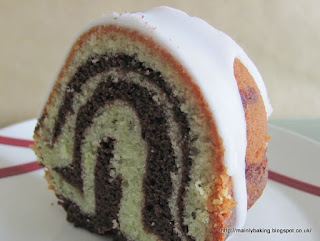 I love this cake - it's simple to make (you don't even need to remember to bring the refrigerated ingredients to room temperature), it bakes to a lovely moist, tender, even crumb and, perhaps most importantly, has never failed to release properly from a bundt tin. It's only downside - and it's really not a large concern for a family of chocoholics - is that, although it can be adapted to many different flavours, one part always needs to be chocolate.

None of the additional flavours to this cake were really dominant, which  meant there was a subtle blending of flavours to give an overall effect which would probably have people puzzling to identify what they were tasting. For me, this was a bonus as I don't really like the chocolate-mint combination in baking, although I love mint flavoured chocolates. Fresh garden mint (spearmint, I think) is different in flavour to the peppermint essence usually used in baking, so this cake was never going to taste like most bought chocolate-mint confections, regardless of the other added flavours. If I change anything when making it again, it will be to add a little more chilli flavour, so that there is a warmer after-taste from the cake. 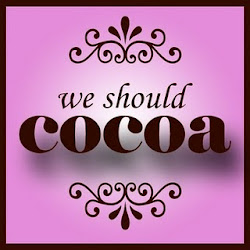 The We Should Cocoa challenge for June was the reason I was using mint at all. I don't like avoiding my regular challenges just because I don't like the added ingredient or the particular type of baking required (the layer cake for Tea Time Treats is another thing I'd rather not have to make), so this was my best shot at camouflaging the mint!

WSC was originally the brainchild of Chele from Chocolate Teapot and Choclette from Chocolate Log Blog, and the rules can be found here. This month, the challenge to combine chocolate and mint was proposed by Victoria from A Kick At the Pantry Door and she will be posting a round up of entries at the end of the month.
Posted by Suelle at 15:37

A lovely looking cake, thanks for sharing the recipe x

Oh wow! That looks wonderful! The lime/chocolate combination is one I usually avoid, but with the mint and chilli I think it sounds wonderful!

This looks just my kind of cake. Beautifully swirled inside too. Great idea to use cayenne to add a little spice

Thank you, all, for your comments.

All bow to the Queen of Marble Cakes! Magnificent as always, Suelle, and what an interesting combination of flavours! I made mint essence a while ago from backyard spearmint - this might be a good way to use it! :)

All bow to the Queen of Marble Cakes! Magnificent as always, Suelle, and what an interesting combination of flavours! I made mint essence a while ago from backyard spearmint - this might be a good way to use it! :)

I would never have thought to combine these flavours, but now I see them it makes perfect sense to me! This is the most beautiful marble cake, and I bet it tasted fabulous. Thank you so much for entering We Should Cocoa!

It looks incredible. And those are all flavours I love :) It is fun when you hit on something even Google hasn't heard of, isn't it?

This sounds like a really interesting combination of flavours. I think I have a recipe for bread using chocolate, lime and chilli in one of my books (not tried it yet). You've now got me wondering if mint would work with that as well. Thanks for being so creative and I think the marbled effect in the cake looks really attractive too.

You do excel at these sort of cakes Suelle, it looks absolutely stunning and reminds me why you are the Marble Cake Queen. The flavours sound lovely too, just the sort of thing I would like. I'm glad you were happy (mostly) with the result :)

Thanks for joining in with We Should Cocoa, I always enjoy your entries. I hope next month's theme doesn't put you off!