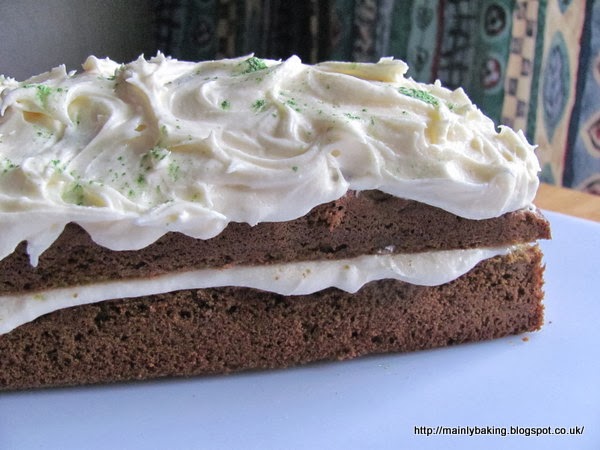 I'm trying very hard to bake small things at the moment, as there's only the two of us here now, and it wouldn't hurt either of us to eat a bit (or a lot, in my case!) less. One problem with small cakes, rather than individual cupcakes, or sliced traybakes, is to get them to look right, proportionally; I don't think I've succeeded very well with this cake - narrower and taller might have looked better.

I chose yuzu as the flavour for the frosting on this cake with this month's AlphaBakes challenge in mind; once that was decided it seemed a logical progression to add some matcha (green tea) powder to the cake batter and give the whole thing a Japanese feel. Yuzu is an Asian citrus fruit with a unique flavour - described as grapefruit crossed with mandarin - and it's juice is found for sale in this country in very small bottles (60mls), usually in the 'world foods' area of supermarkets. Lemon juice is probably the nearest substitute for flavour. 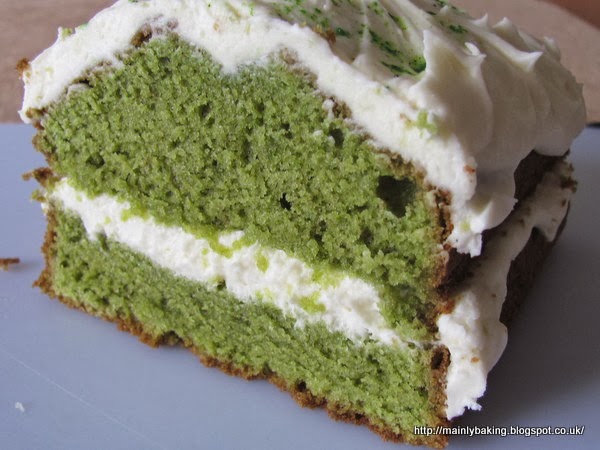 The cake was a standard all-in-one 2-egg sponge mixture, with two teaspoons of matcha powder added. I baked it in a straight sided tin which was 7" x 4" (a 1lb loaf tin is a similar size, but I didn't want sloping sides).

When the cake was cooled I filled and topped it with a buttercream flavoured with yuzu juice - I started with 80g softened butter, 180g sifted icing sugar and 45ml (3 tablespoons) of yuzu juice. I then added 4 rounded tablespoons more icing sugar to make the buttercream firmer. Finally, I sprinkled about 1/4 teaspoon of green lustre powder on the top, in lieu of anything better to decorate with!

The flavour of the buttercream - intensely citrusy - was the dominant flavour here. I'm not sure whether my matcha powder isn't very strongly flavoured, or I'm just not using enough of it, but the flavour just wasn't coming through. However, the yuzu flavour alone was enough to make this delicious. 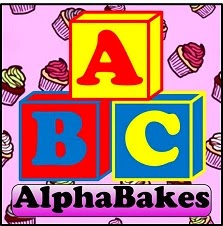 AlphaBakes (rules here) is a baking challenge hosted alternately by Caroline at Caroline Makes and Ros at The More Than Occasional Baker. The idea is to bake something either whose name begins with the randomly chosen letter for the month, or one of the major flavouring ingredients begins with that letter. This month the letter chosen is Y and Ros is the host who will be doing a round up of entries at the end of the month.

good lord this looks stunning and I love the green colour! A slice please!

Wow that looks stunning! Love the green colour, shame it didn't taste that strong. I'd love to try the frosting, ive never tasted Yuzu, sounds so fresh and zingy

That looks really impressive, Suelle. Have never tried matcha tea or Yuzu, but would love a slice of your cake!

As you know, I'm a big fan of matcha cakes. I find you do have to use quite a lot if you want a strong flavour. And another unusual ingredient. I am not intrigued by what a Yuzu flavoured icing tastes like. Great letter for Alpha Bakes and will beat my boring old yogurt hands down - if I ever get around to posting the recipe.

What a brilliant entry for AlphaBakes - I'd never have thought of using Yuzu! I love that you paired it with a green tea sponge - I find the matcha flavour quite subtle when baking but if you add too much it can be bitter. Thanks for entering AlphaBakes.

What a fabulous colour! I looked at some matcha powder the other day in china town and was alarmed at the price, not sure if I was looking at the wrong thing perhaps?!

I think you probably were looking at the right stuff, Anne. Matcha is expensive, although some suppliers now produce a slightly cheaper cooking grade. I found some at a more reasonable price while on holiday in Canada.