All of a sudden, sugar seems to be a dirty word! It doesn't matter whether we need to lose weight, or are just worried about a healthier lifestyle; either way we shouldn't be eating refined sugar! We're even told that sugar is now thought to be at the root of many illnesses previously thought to be due to eating too much fat. 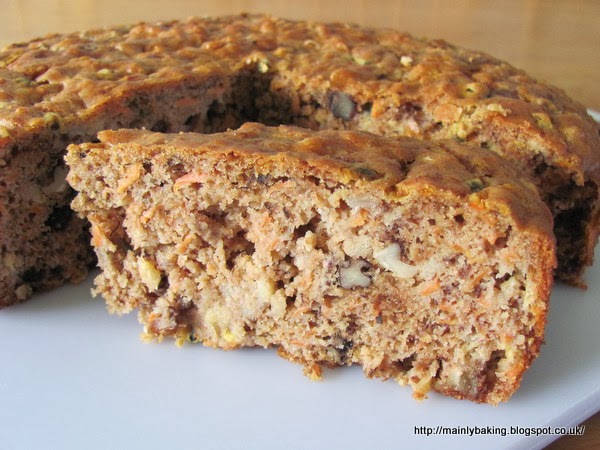 I'm sure it's a lot more complicated than that, but I do find that the most effective sort of weight loss diet for me involves reducing carbohydrates, and refined carbohydrates such as white sugar are the easiest to cut out (as long as you don't ask me to cut out chocolate!). I lost a lot of weight following the 5:2 diet, where the restricted calorie intake on two days a week meant that there just wasn't room for many carbohydrates in a day's food; I also had to watch the carbs on non fasting days, or I could easily find myself eating too much in compensation for the restricted days. At the moment I'm 'resting' on a reduced carbohydrate diet, until I'm ready to tackle another bout of weight loss; I'm maintaining my weight and even still losing a little.

Anyway, that explains why I was attracted to the recipes in this article in the Daily Mail; although it is part of a series aimed at what it calls a 'sugar detox' for your body, leading to total avoidance of refined carbohydrates, the recipes here aim to sweeten cakes and desserts with only the natural sugars found in fruit and starchy vegetables. I thought the Pineapple and Carrot Cake was the recipe which best fitted in with my current eating style - it would give us something to eat with our evening cup of coffee and could be my only carbohydrate fix of the day, if I was being really strict with myself. 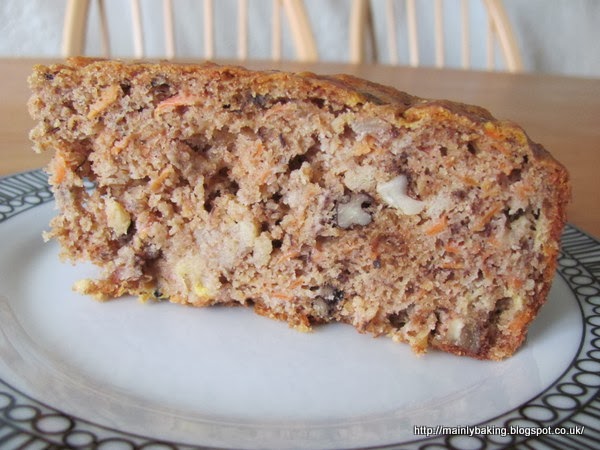 I deviated slightly from the recipe, in that I used sunflower oil, and I also added about three tablespoons of sultanas (one spoonful didn't look worth adding!). I had spelt flour in the store cupboard so used that rather than buckwheat flour. The sweetness in the cake comes from canned pineapple, banana, carrots, sultanas and passion fruit, and some crunchiness is added through the use of walnuts.

I was pleasantly surprised by this cake. The texture was much lighter than I expected and the combination of fruit, vegetable and nuts gave a really good flavour, although I think a little spice (perhaps cinnamon or nutmeg) would be an improvement. On first tasting I thought that the cake was really going to suffer from the lack of sugar, but the reduced sweetness grew on me, and I could see how this would be a good cake to eat if you were really serious about cutting out all refined carbohydrates - the sweetness of a 'normal' cake would tempt you back into eating more sugar. You could add some artificial sweetener to bring the flavour up to the normal levels of sweetness, but I think it's far better to train your taste buds to accept less sweetness as normal.

Good on you for sticking to the 5:2, I found it really hard. Your cake looks lovely! :)

Cake looks great. I find it hard to cut out carbs. Good for you sticking to 5:2 I keep saying I'm going to give it a try.

Trust the Daily Mail to make you feel guilty about something! I know exactly what you mean about sugar - have you discovered coconut sugar yet? It's delicious, has a much lower GI than cane sugar and a higher mineral profile. I like to think it means you can have your cake and eat it too!

KM - I've never heard of coconut sugar. Things are slow getting to us in the countryside, so I suppose I'll have to wait a while before I can buy any.

The cake looks good. I also find cutting down on carbs difficult, but will try and cut down on sugar in baking.

Hi, snowy! I expected the lack of sugar to affect the texture of the cake, but that wasn't the case. Depending on what else is in the cake, I think you could easily reduce sugar by 25% without really noticing the loss.