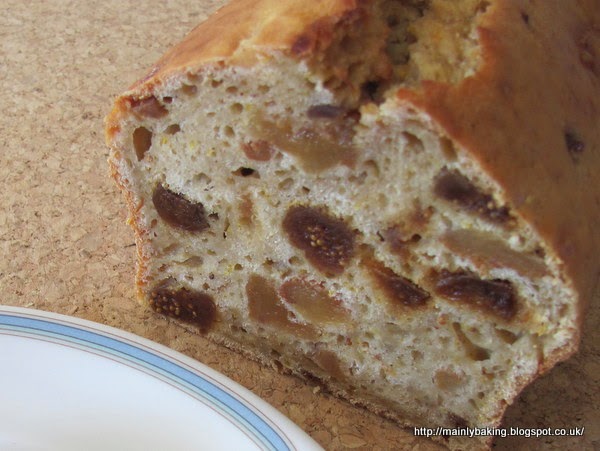 This recipe comes from Ruby Tandoh's first book 'Crumb' which has just been published. Ruby was a finalist in last year's Great British Bake Off TV programme, and now writes a regular baking column for the Guardian newspaper, which appears in the Saturday 'Cook' section. This extract of recipes was published recently in their Weekend magazine.

I'm not totally enamoured of her style, and she's certainly no replacement for the much missed Dan Lepard, but the odd recipe catches my eye, and this was one of them. I think it was the unusual mix of flavours, something that Dan specialised in, that attracted me, and the use of dried figs, which I love, but rarely see recipes for. 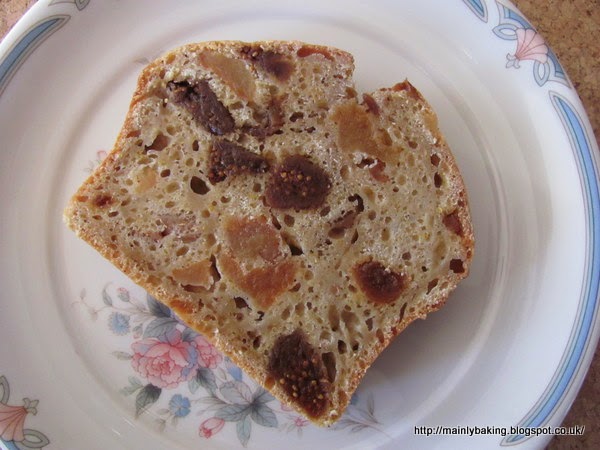 In the event, I didn't have enough figs in the store cupboard, so used 2/3 figs and 1/3 dried pears, but I don't think this affected the final flavour much, as figs have a very strong flavour whereas pears are quite bland when used in a cake.

This is a tea loaf which doesn't use any fat, but I think it would have benefitted from adding some. The blend of flavours worked really well (Ruby describes the flavour as "floral, citrus, liquorice, spice and caramel, and yet not definitely any one of those things"), and the fragrance was amazing, but the loaf was let down by the texture of the crumb. It was quite dense and stodgy, although the dried figs kept the overall texture moist enough.

I'll definitely be trying this combination of ingredients in a cake batter soon, in a bid to improve the eating quality!
Posted by Suelle at 10:18

I love the combination of fig and anise!

Interesting mix of flavours- but I agree that Ruby's no replacement for the much missed Dan L.

That sounds a scrumptious combination. You don't see star anise used much in baking, but I love it. Shame it was a bit stodgy

I like the sound of those flavours too and baking with figs is something I don't do enough of. I've tried a couple of Ruby's recipes from the Guardian and haven't been impressed with either of them. She's good on flavours, but not so much on the actual recipes - in my limited experience anyway. I didn't know she'd come out with a book.