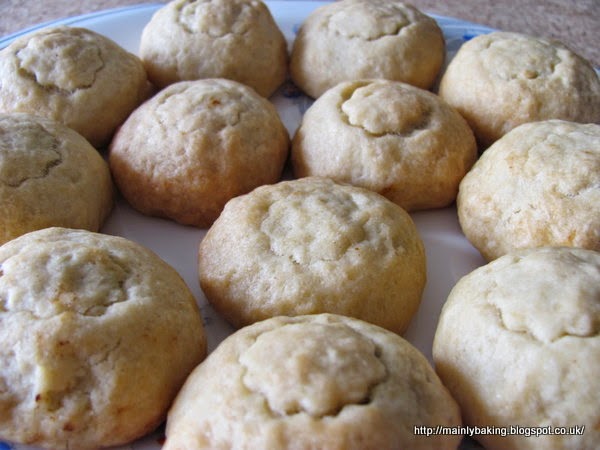 I only had one reason for making these cookies, but I'm really glad I did. The reason was that the letter I had come around again in this month's AlphaBakes challenge, and it's a really difficult letter to use  - not many ingredients begin with it and not many recipe names start with it, so, like the last time, I looked for traditional recipes from a country beginning with I, and found these little date filled pastries from Iraq. 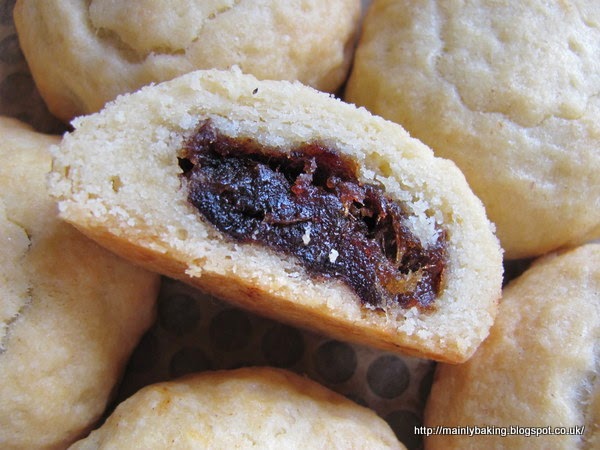 I followed the recipe carefully, but ended up with a very soft dough which I found quite difficult to work with (my conversion of 3 cups of flour to 400g might have been a little off). By the time I realised I wasn't going to be able to shape the cookies in a mould, and they wouldn't hold the marks from fork tines, it was too late to have a go at the alternative shape of logs which would be sliced after baking (see the bottom photo in the link above; it's taken from the book I was using - The Complete Middle East Cookbook, by Tess Mallos). Instead, I flattened the filled balls of dough slightly, and used a tiny cookie cutter to make a light impression on top. 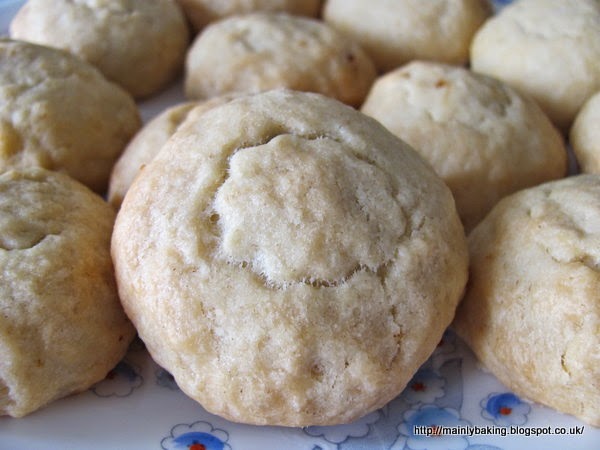 My only other deviation from the recipe was to add a few tablespoons of water to the chopped dates while they were cooking as they had become very dry in storage, and wouldn't soften with just the butter.
These unassuming little cookies were actually quite delicious; I used rose water in the pastry which complimented the date flavour very well, as well as giving the cookies a wonderful aroma. One complaint from my husband was that he thought the pastry was too thick in relation to the amount of filling, but as the pastry was crumbly, sweet and flavoursome, this wasn't a huge problem. 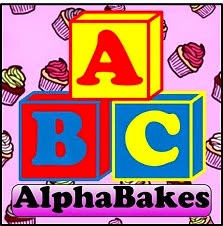 AlphaBakes is a monthly baking challenge jointly hosted by Caroline, of Caroline Makes and Ros The More Than Occasional Baker. The host (it's Caroline this month) introduces a randomly chosen letter of the alphabet, and then publishes a roundup of entries at the end of the month. Entrants must use the chosen letter as a significant ingredient or part of the name of the recipe they bake. For example, B could be for Banana or Bakewell Tart.
Posted by Suelle at 13:59

I really appreciate the effort you put in to find something for Alphabakes, it was a hard letter this month! And not knowing what shape the pastries are supposed to be, I think yours look absolutely fine!

These sound really interesting.I love dates in any form.

Oh Suelle, I want some of these date cookies, they sound fabulous indeed. Using rose water in the pastry is inspired. As is using a country's name for AlphaBakes - I've got completely stuck on i and can only think of icing! Now I shall think again.