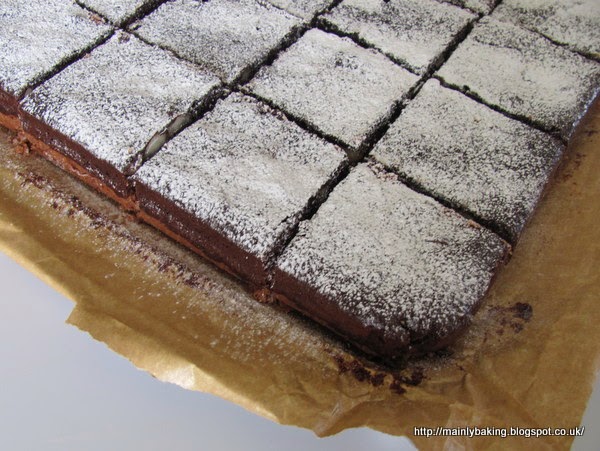 This is definitely a 'slice', not a traybake, not just squares, because it's my entry to the new cooking challenge at Caroline Makes - Formula 1 Foods. Caroline's partner is an avid Formula 1 fan and the new Grand Prix season starts this weekend. Caroline says she often bakes while the GP coverage is on TV, but admits that the fixtures dominate their weekend social life. Readers - we used to be like that! However, my husband's interest is waning a little, as the rules have changed (to the detriment of the sport, in his opinion) over the years and only the richest teams are competitive now. The fact that the races aren't all shown live on terrestrial TV doesn't help either, but at least we don't have to plan our activities around race times any more! He doesn't mind missing a race, or watching the highlights only. 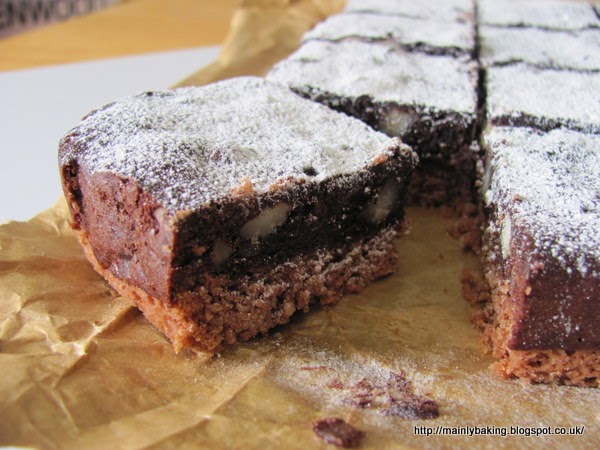 Anyway - back to Caroline's challenge! She wants us to prepare something inspired by the country where each race is taking place, and the first race is in Australia. That brings us back to my stipulation that my bake is a 'slice', that mainstay of Australian baking, and not a fudgy brownie (as one of the recipes I used calls it!). To reinforce the Australian experience, I added macadamia nuts to the top fudgy layer, and just a hint of coconut into the bottom biscuit layer. Macadamia nuts are one of the few food products that is only produced in Australia, so what could be better to use? 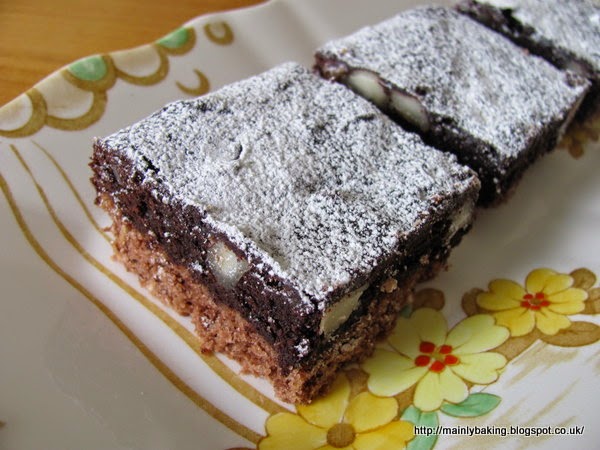 I even chose the recipe for the base layer from one of my Australian Women's Weekly Cookbooks - Cakes and Slices. It was really simple to make - 125g melted unsalted butter was mixed into 155g SR flour, 2 teaspoons cocoa, 60g caster sugar and 20g desiccated coconut. Once everything was well mixed, the dough was pressed evenly into a lined 20cm (8") square tin and baked at 190C for 15 minutes.

The topping came from this recipe for Fudgy Mocha Brownies, which I've used once before. I left out the coffee and used 100g of roughly chopped macadamia nuts instead of the hazelnuts. I accidently left out the baking powder too, but this was an improvement, I think, as the first time I used this recipe I said the top layer was more cakey than fudgy, but this time it was denser and more fudge-like! 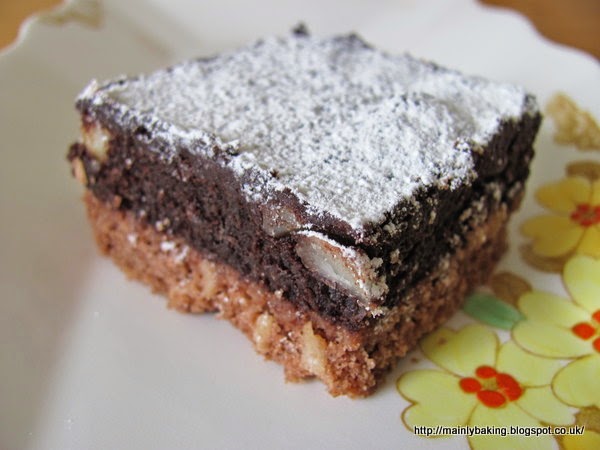 I cut the slice into 16 squares, which gave decent sized portions (2" (5.0cm) square). Getting 36 squares out of the slice, as the recipe suggested would have meant tiny portions - nice for some occasions, but not for everyday eating!

These squares (what do Australians call the pieces from a slice?) were delicious! A dense, rich, intensely chocolate, fudgy topping on a crisp buttery cocnut shortbread base, which had just a hint of chocolate in it. The base was a little crumbly, but made a good textural contrast to the topping. The macadamia nuts added crunch but not a lot of flavour - the small amount of coconut in the base had a stronger flavour!

I hope Caroline gets a good response to her challenge; it's relatively easy to get inspiration from Australia for all sorts of cooking, but I think some of the venues will prove more difficult, especially for people like me, who only want to bake.

The slices from a slice are a slice. It's like fractal baking.

I suppose there's a certain logic to it, Alicia, although asking if someone wants a slice from a slice sounds a bit weird! ;)

Such a hysterical food challenge. I love it!! This looks gorgeous. I love the two textures. Reminds me of a double decker!

An interesting food challenge. I love these - great combination of ingredients.

The slices look great and I'm sure they tasted really good. I love macadamia nuts but don't have them often due to cost.

Car racing is definitely not for me, but these slices are much more the thing. A biscuity layer topped with fudgy brownie sounds like a great contrast in textures - lovely.

Thanks for sharing this with Formula 1 Foods! The slices look lovely, I didn't actually know that macadamia nuts were only found in Australia!