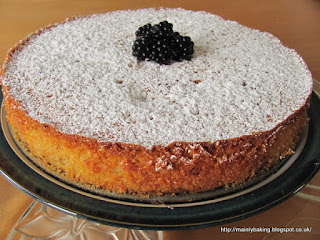 Several weeks ago I bookmarked a gluten-free cake recipe that I wanted to try, but for various reasons I hadn't got around to making it. After we'd been blackberry picking, I remembered the cake, and even though it was made with raspberries, I thought the recipe would work well with blackberries too, and make a change from apple and blackberry crumble. My husband loves a fruit crumble above all else, so he needed a little persuasion that change was a good thing! 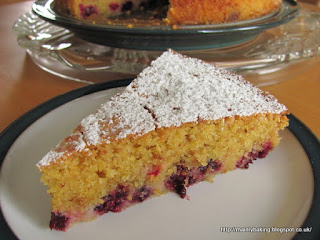 Necessity forced a few other changes too - ground hazelnuts instead of almonds, and the zest and juice of a lemon and a tangerine, instead of 2 lemons. I really don't like making huge alterations to recipes before I try them as written, but I was confident that my changes would only affect the flavour, not the technical aspects of the recipe. I might have been wrong about that!

The cake batter looked a little strange when mixed - it was very grainy but I put this down to my home-ground hazelnuts not being as fine as commercially ground almonds. It was also quite sloppy, possibly for the same reasons - I hoped that once the polenta started absorbing the moisture during baking it would sort itself out. It did sort itself out in the oven, but not before all the fruit sank to the bottom. This could have been because of the sloppy batter, or because blackberries are heavier and juicier than raspberries. 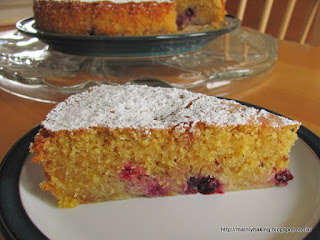 Now I'm interested in trying the recipe exactly as written, to see if my changes affected the outcome, or whether it wasn't such a good recipe in the first place, and the fruit will sink even when raspberries, and finely ground almonds are used.

None of this stopped the cake being absolutely delicious. Hazelnuts and blackberries are a good flavour combination, and the subtle hint of citrus blended in well without overwhelming everything. If the fruit had stayed evenly distributed throughout the cake, I'd have said that 200g wasn't really enough, but more sinking fruit would have made the bottom of the cake too moist.

Karen, over at Lavender and Lovage, and Janice at Farmersgirl Kitchen are co-hosting a round-up of blackberry recipes until mid-September, so I'm submitting this recipe for it's deliciousness, even if the technical execution wasn't perfect!

I picked some blackberries yesterday, so this is a great cake to try.

This looks amazing and quite frankly just how I like a cake to be. Gorgeous.

I love a polenta cake but never thought of adding blackberries, brilliant idea. Thank you for joining The Great British Blackberry Recipe Round Up :-)