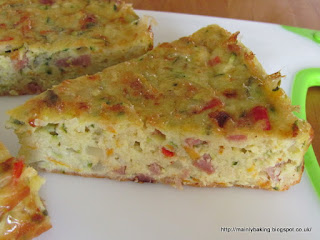 This savoury bake is ideal for summer, especially when the forecast is for weather so hot that you wouldn't want the oven on, and you have enough warning and time to bake ahead. It's also good for when the courgettes are producing fruit faster than you can harvest them, or there's a glut on the market. We're not quite at the over-production stage, but I'm determined not to allow things to get out of hand this year - I don't want any marrows!

My inspiration comes from this recipe on Fig Jam and Lime Cordial, which I've written about before. This time I used two thick slices of smoked ham instead of the bacon, and added a sliced chilli and some shredded sage leaves for extra flavour.

This is what I used, but it seems a very versatile recipe, so a little more or less of any of the flavouring ingredients probably won't make a lot of difference, as long as you keep the batter the same (the eggs, flour and oil). I guess it would also be OK to add things like leftover cooked vegetables to the mixture too, as part of the total weight of vegetables. 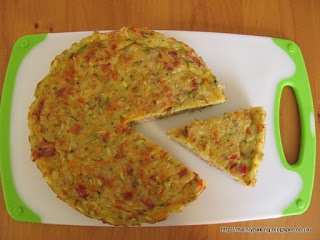 Just mix everything together, pour into a parchment-lined baking dish (I used a 23cm (9") cast iron pan) and bake in a pre-heated oven at 175C (fan) for around 50 minutes until firm and golden brown. The baking time depends on the depth of mixture which is determined by the size of the dish you use. A 20 x 20cm (8 x 8") square dish would be a similar size - anything smaller will give a deeper mixture which takes longer to cook. 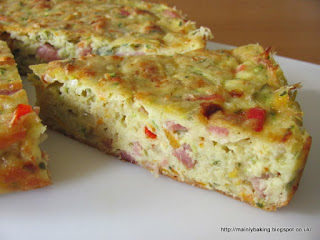 This is best eaten warm or at room temperature. It's probably OK hot too, but I haven't tried that - I'd still let it rest for about 15 minutes after coming out of the oven.

Although this is very similar to a quiche filling, or a frittata, the SR flour makes it a little sturdier, whilst still keeping it light because of the raising agent, and the oil keeps the texture moist. The added bonus over a quiche (besides not making pastry, thus avoiding a soggy bottom) is that the onion doesn't need pre-cooking - any moisture given out during cooking is absorbed by the batter, which doesn't happen with a quiche filling.

I'm sending this to Belleau Kitchen's Simply Eggcellent bloggers' link-up. Dom is allowing us free reign this month saying that 'anything goes'! This dish makes a quick and easy main course, could easily be made vegetarian  and is robust enough to hold up in a lunch box or picnic basket, making it a useful recipe during the holiday season.

I always get put off making quiche or flan due to the pastry part - your version is perfect for me! I have just finished writing my meal plan and now I'm considering changing to add this, I bought some shredded ham hock yesterday which I think would be ideal!

A great idea not to have to make pastry, and the filling sounds delicious and very versatile. Another one to try.

My husband prefers this, and the cauliflower cakes I've posted about, to ordinary quiches, and they're certainly easier to make!

mouth. watering. hold. me. back.... need. now!... amazingly colourful too. I love it. Thanks for linking to Simply Eggcellent x