inspired by the history of chocolate in Central America and Mexico 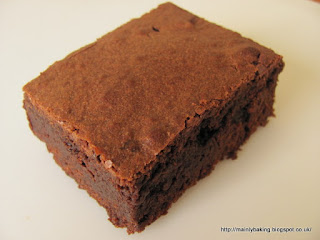 I think most chocolate devotees will know that the first record of cocao trees dates back to the Olmec civilisation, which was to be found in the forests on the Gulf of Mexico as long as three thousand years ago. One of the first known uses for cacao beans was in a spicy bitter drink made by the Mayans, another ancient civilisation in Central America, around AD 300.

The Mayans used local spices to flavour the drink made from the cacao bean; one of the most often used spices was chilli, but vanilla, cloves, allspice, pepper plus nuts and flowers were also used. The sweeter spices such as cinnamon and aniseed started to be used when the drink was sweetened with sugar, around the 16th century. Nowadays, chocolate products flavoured with chilli and cinnamon are often given names alluding to their Mexican or Mayan heritage.

It was with this in mind that I decided that a spiced chocolate brownie was the best thing to make for the Mexican round of the culinary challenge called Formula 1 Foods, over at Caroline Makes. The idea is to make either a traditional dish eaten in that country or something inspired by the culture, traditions and ingredients found in that country. 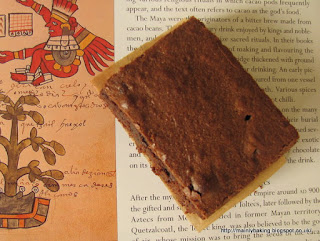 I made my usual brownie recipe and added some suitable spices. I decided to go with subtle hints of chilli rather than a blast of heat, as well as using some of the less common spices used by the Mayans.

To a brownie batter made by melting 140g each of butter and plain chocolate together, then adding in turn, 300g light muscovado sugar, three eggs, 160g plain flour and 3 tablespoons of cocoa, I added a teaspoon of vanilla extract, 1/2 teaspoon of ground ancho chilli pepper, 1/2 teaspoon ground cinnamon, 1/4 teaspoon ground aniseed and a pinch of ground cloves. This was baked for 25-30 minutes at 180C, in a 20cm square tin.

This combination of spices proved to be just what I intended - warm (my jar of ancho chilli powder was described as warm and earthy rather than hot), and well balanced, with none of the flavours overwhelming the others. I think most people would be hard-pressed to identify any of the individual spices used, unless they had a well trained palate - even the chilli blended well with the other spices used.

This sounds really interesting Suelle. I love spices, and your brownie recipe is the one I always make, so will try this at the weekend.

Chilli goes really well with chocolate and I like the sound of these brownies - thanks for sharing with Formula 1 Foods! Only a couple more countries to go!