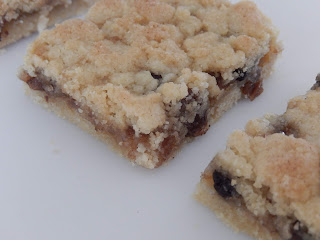 There's always mincemeat to use up after Christmas, but even with an opened jar in the fridge, I couldn't resist a 'reduced to clear' jar of Bitter Orange and Juniper Mincemeat in Waitrose. So I rolled out my favourite shortbread slice recipe yet again! I've made mincemeat versions of this with various embellishments - marzipan or chopped hazelnuts in the topping, cranberry sauce mixed with the mincemeat - but decided that this time I'd use the mincemeat just as it was, to allow the orange and juniper flavours to shine through. I used about 300g of mincemeat for the filling, but it wouldn't have hurt to add a bit more. 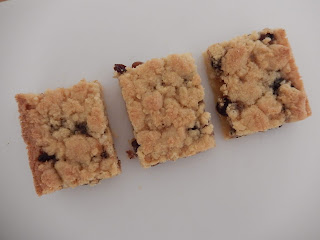 Although the recipe was as good as usual, with crisp, melt in the mouth shortbread layers, I was a little disappointed that the advertised flavours of the mincemeat - bitter orange and juniper - weren't really very strong at all. It didn't seem much different to the basic mincemeat I'd used for my mincepies at Christmas, and in the past I've added better orange flavour by adding freshly grated orange zest to mincemeat.
Posted by Suelle at 09:33

What a great way to use up mincemeat. The flavours sounded interesting - shame they weren't very strong.