With this cake I surprised myself by finishing off my mincemeat before the end of January; it's not unusual for me to be baking with the remnants from a jar at Easter. I've used this recipe before, adding my own touches to the ingredients, as you can see here. 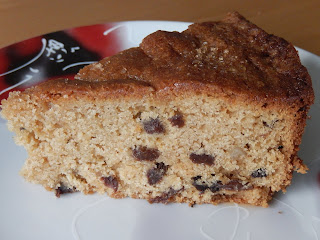 As I had two jars of mincemeat open, one of which had orange flavour notes, I added the zest of an orange to the cake, and soaked the rather wizened sultanas I was using in the juice of the orange for a couple of hours, before draining off the excess. I was lucky that there was just about 400g of mincemeat when the contents of both jars were combined. I also added a sprinkling of demerara sugar as a topping, before baking.

I cooked the cake in a smaller tin - 20cm in diameter - as I prefer a deeper cake, but this didn't affect the cooking time, it was still done in 75 minutes.

It looks, in the photo as if the fruit sank, but that's just the randomness of that particular slice - it was  much more evenly distributed in reality! Adding the orange definitely perked up the cake - the usual spiciness and tartness of mincemeat is muted when it's spread though cake batter, giving a much more gentle flavour.
Posted by Suelle at 10:24

I didn't get around to making my usual mincemeat cake this year and now I'm really missing a slice or three. I like the idea of using one of the excellent oranges around at the moment too.

I love mincemeat cakes, this one looks lovely. The addition of orange juice and zest sounds like a brilliant idea.

Another great way to use up mincemeat. Like the orange flavour. Will have to look out for some this year.