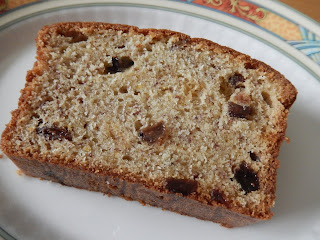 After deciding to leave two bananas to ripen enough to use in a cake, I realised that I've never made a basic simple banana bread/cake in the 10 years I've been writing this blog. It was definitely time to remedy that situation, even though I don't regularly have bananas available.

Of the two simplest recipes I could find, I decided to go with Mary Berry's, as she appeared to be cutting down on the fat and sugar content to compensate for adding the bananas rather than just putting bananas into a standard sponge cake recipe, as here. The other advantages of Mary Berry's recipe were that it was an all-in-one mixture, so really quick to put together and get into the oven, and would freeze well. Being able to freeze slices of cake is always a bonus for me! 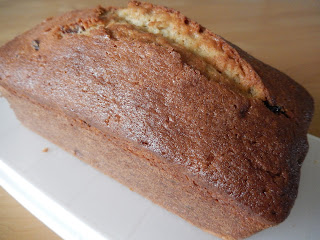 After saying I wanted simple, I then changed my mind a little and decided that I would like some extra flavour, so I added the zest of a small orange, 70g of a mixture of sultanas and dried cranberries, and I used 2 tablespoons of orange juice instead of the milk in the recipe.

I folded the fruit into the batter after it had been mixed, rather than include it at the all-in-one mixing stage.

None of these changes affected the baking time - the cake was still cooked in the time suggested in the recipe.

The cake had a lovely texture, moist but not too heavy, and the extra ingredients boosted the flavour without masking the taste of the banana. 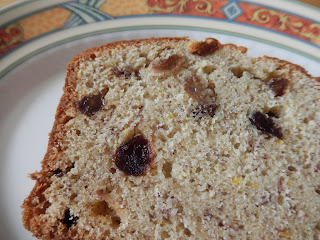 This is definitely a cake to remember when I'm baking for coffee mornings, and I can imagine other additions that would work well - chopped dates, for instance, or nuts and a little mixed spice.

I'd even go so far as to say it's a cake worth buying bananas for, if you can plan far enough ahead to let them ripen!

My favourite loaf cake. On my list to make this week. Stay safe.