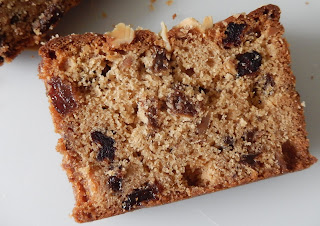 It seems quite a long time since I tried a new recipe; I have a lot of favourites that I keep returning to at the moment, either because they are reliable (if I'm baking for someone else), or I know they freeze well.

I knew I wanted to make a mincemeat cake to use some of the Christmas excess,  so decided this might be the time to try a new recipe. Mary Berry's recipe appealed because it made two small loaves and she says they freeze well.

It's a straightforward recipe to follow - it's an all-in-one mixture, so you just need to make sure you have well softened butter before you start. I didn't have currants, so used dried cranberries instead, and topped the cakes with flaked almonds rather than split nuts.

The cake batter was very stiff, and with the benefit of hindsight, now that I've cut the cakes, I think I should have added a couple of tablespoons of milk to loosen it a little. The cakes were a little dry and crumbly, and didn't compare favourably, in that respect, to the recipe I usually use. They rose well during cooking, in terms of increased volume, but there was a definite dip in the middle of each one. I think I might have been guilty of not mixing well enough, as the batter was so stiff. 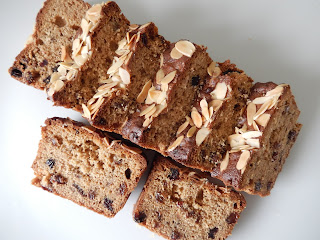 As always with this  sort of cake, the final flavour relies heavily on any added ingredients in the mincemeat. I used a Waitrose brand with their 'Christmas 2019 special' ingredients of plum, honey and ginger. Even after being diluted into the cake mixture, the plum flavour (provided by prunes and plum juice) was still evident.

I think this is a recipe to use again, as it uses mincemeat leftovers, rather than a whole jar, but I'll be more careful next time, and make sure the batter has a 'dropping' consistency, and is well mixed.
Posted by Suelle at 09:28

Very nice recipe. We have to try. So easy, flavorful and delicious.