AKA the brownies that were so good I made them again! 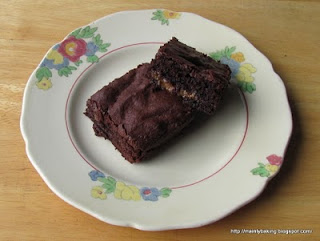 Not much to write about here. We really enjoyed the Ultimate Makeover: Chocolate Brownies from Good Food, so I used the same recipe again. The only difference this time was that, after putting half the brownie batter into an 8" square tin, I dotted roughly 200g of caramelised condensed milk over the surface, before spreading over the remaining batter.

This did have an effect on the brownies - they didn't rise as much as before, but this was compensated by the gooey pockets of caramel in the finished brownie. It's the first time I've succeeded with this type of recipe - previously the caramel has been absorbed by the brownie batter.
Posted by Suelle at 13:22

I love caramel brownies! This sounds like a great way to make them.