Having acquired a bottle of date syrup, I needed to find a recipe in which to use it. I needed something which used enough syrup to notice the flavour, but not one which used the whole bottle in one go. After a lot of fruitless searching, I went back over the Guardian recipes on Dan Lepard's site and found this recipe for Rye Apple Cake. I'd already tried the recipe once, before I started blogging, so knew it was a tasty cake, and this also made me feel comfortable about adapting the recipe a little to suit my needs. 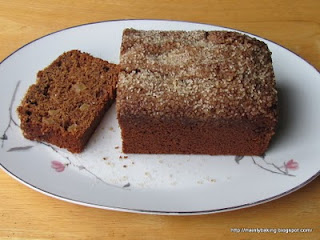 I used date syrup instead of golden syrup, sunflower oil instead of butter and left out the almonds altogether, replacing those in the cake batter with plain white flour, and just sprinkling demerara sugar on top. This is quite a low fat recipe anyway, producing a loaf which is more like a teabread than a cake, but as the butter is melted with the sugar and syrup, I thought changing it for oil wouldn't alter the recipe too drastically. I left out the ground almonds because FB has a severe peanut allergy and prefers to avoid other nuts as much as possible - large amounts can produce mild allergy symptoms, and allergic reactions can get worse with repeated exposure, so it pays to play it safe from her point of view!

None of the changes appeared to have a detrimental effect on the recipe - the resultant loaf was dark and moist, studded with little pieces of cinnamon-y apple. I'm not sure I could notice the date syrup as a separate flavour, but it combined with the rye and dark sugar to give rich, distinctive but not oversweet flavour. The apple pieces collapsed a little during cooking, leaving small holes above each piece, but this wasn't a huge problem.

Here's my revised recipe, with thanks to Dan Lepard for the original! 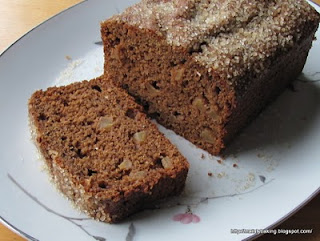 Method
Prepare a 2lb loaf tin and pre-heat the oven to 170C (same temperature for fan ovens).
Peel, core and dice the apple into 1cm cubes or smaller. Toss with the cinnamon to coat the apple pieces.
Mix the two flours and the baking powder in a bowl.
In a large saucepan, gently heat the oil, syrup and sugar, until the sugar is dissolved. Do not bring to boiling point.
Remove from the heat and beat in the milk and egg.
Stir in the flour mix until evenly blended, then fold in the apple pieces.
Transfer the batter to the loaf tin, level the surface, and sprinkle heavily with demerara sugar.
Bake for 30-40 minutes, or until a test probe is clean. Cool in the tin.
Posted by Suelle at 13:04

This is just my kind of cake Sue. It looks so moist and tasty.

I love the dark colour you've got there. I guess that's a combination of the dark sugar, date syrup and rye flour, but it looks almost treacle-y. I made this recipe (in an adapted form) ages ago and you've reminded me how good it was. I should try it again using rye flour this time!

Ooh, that is an interesting twist on the original, Suelle. Thanks! I have a jar of date molasses (which I think is the same as your date syrup) and have been using it in place of golden syrup in baking too! :)

Snowy - in fairness to you, I have to say FB found the cake a little too dry for her, so it's not as moist as it looks. You could treat it as a teabread and serve the slices buttered!

C - so many recipes, so little time!

Celia - I think it might have been you who inspired me to try the date syrup!

Date syrup sounds like a great product - I'd imagine that it's much more healthy than golden syrup.

I really like all the alterations you have made - my Mother doesn't like nuts so this is an idea for her next afternoon tea (for which I do all the baking!!)

This sounds such an interesting loaf, especially with the use of rye flour and I must try and remember next time I make an apple cake to roll the apple pieces in cinnamon - that sounds so delicious. Date syrup is a lot less sweet than golden syrup so I expect it would be a good substitute when not wanting too much sugar. It works really well stirred into melted chocolate to top a cake.

Thanks Choclette - that's a useful tip for making a cake frosting.

Is date syrup similar to syrup of figs?

"Is date syrup similar to syrup of figs?"

I don't think 50g spread through a cake is enough to find out, fortunately! LOL!

I made this cake (original version) quite recently but I must have used light brown sugar as it didn't look nearly as dark and desirable as yours :)

In addition, the date syrup is darker than the original golden syrup, Joanna.

not enough date syrup recipes in the States..