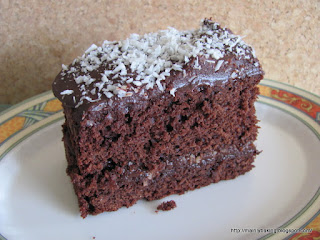 This cake was inspired by this Double Chocolate Lamingtons recipe from Dan Lepard, in yesterday's Weekend Guardian. I love it when there's what is essentially a store cupboard recipe from Dan, as I'm often stumped for new ideas by the weekend, but don't read the newspaper until after I've been shopping.

I could have followed the recipe exactly, but I didn't have enough coconut. In addition, I didn't really like the idea of having at least 1/3 of the chocolate coating left over, probably contaminated by cake crumbs, and using up to 500g of coconut, much of which would also be left over, but mixed with drips of chocolate icing. My thrifty nature just couldn't come to terms with this! 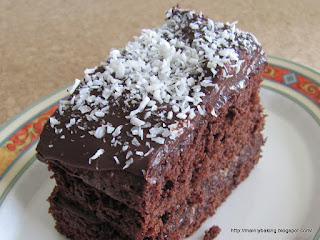 Instead, I followed the recipe for the cake exactly, and split it in half when cold. I made half of the chocolate coating recipe, and allowed it to cool to spreading consistency. I then used used half, together with a sprinkle of desiccated coconut, to sandwich the layers. The rest was spread on top, and finished off with another heavy sprinkle of coconut.

This was a delicious chocolate cake - richly flavoured and moist, but still very light in texture. The techniques for keeping in moisture worked very well! It's also quite low in fat, in proportion to the other ingredients, although it does contain some butter. Despite a high proportion of sugar, both in the cake and the frosting, it wasn't over-sweet. The coconut gave a little extra taste and texture when eating, and an idea of what a real Lamington might be like!

I really liked this chocolate cake recipe - I can see it becoming one of the recipes I keep returning to - especially for layer cakes.
Posted by Suelle at 10:38

Mmmm this looks seriously good - I love chocolate and coconut...such a good combination! I've tried making lamingtons before but it always just turns out to be super messy - this is a really good alternative!

Lovely looking cake...and you're just in time for Anzac day too as it is Lammington inspired! It looks lovely and moist aswell! :-)

I love the idea of making this as a layer cake - I'd love to try the cake part but am not so keen on the cutting and rolling, so this would be perfect. Definitely going to make this soon, especially with your good review of it :-)

Delightful looking cake! I am a huge coconut fan - I would love to try this!

Really like your take on the Lamington Suelle, it looks really pretty and also lovely and moist. I'm off to havea look at the recipe.

I'm all for a thrifty nature and it's always nice to know we are not alone ;-)

I love it when I have every I need for a recipe in the cupboard. This looks so good.

what a great idea, Suelle. Much prefer it as a layer cake. It looks moist and delcious.

I absolutely love coconut! and obviously chocolate is a given so what a delicious sounding cake!

I saw this recipe too and thought it was odd that so much chocolate topping would be left over. Great idea to split the cake and use it as filling. Looks so chocolaty and moist.

Katie - I think so much extra chocolate is needed so that it's as easy to coat the last cube of cake as it is the first. That's OK if you can find a use for the leftovers!

Did the topping thicken ok for you? How long did it take to be spreadable?

Hi Caroline - after waiting about an hour, I refrigerated the topping, but you do have to check it every few minutes then. It took about another 30 minutes to be spreadable but not too thick, but it never became really solid - just fudgy.

I like the sound of it apart from the coconut. What do you think I could use instead? Or is it essential? Not being Australian I don't need to be authentic :)

Joanna - the cake recipe on it's own is very good, so the coconut certainly isn't essential to enjoy this. In view of Caroline's problems with this particular chocolate coating setting, you might prefer a more solid chocolate frosting. You could also fill with Nutella, or with cream and raspberries, and dust with icing sugar.

One of my favourite fillings for a chocolate cake is a layer of apricot jam and a thin round of marzipan - after a day or so the marzipan and jam meld to make a sticky almondy filling.

This looks like a great cake indeed! I'm not a fan of coconut so will omit that but would love to try the chocolate cake and frosting.

Thanks for leaving a message on my blogger event page. I am adding those sites you mentioned now, x

This looks great! I love chocolate and coconut!