Serendipity is the "the accident of finding something good or useful while not specifically searching for it" according to Wikipedia. Finding this Dan Lepard recipe in my weekend newspaper magazine was certainly a happy accident. Just the day before, FB had been asking if it was possible to put the flavours of lebkucken into a cake, and here was Dan, claiming that his ginger rock cakes would be reminiscent of lebkucken! In yet another touch of serendipity, or maybe just good luck, I had all the ingredients to hand, so that was my weekend baking sorted! 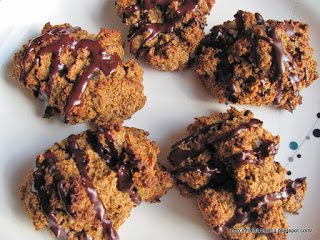 This is a simple recipe to follow, yet still raised a question - the dough needs to hold it's shape, but how wet does it need to be? I added an extra tablespoon of milk to the 25mls added to the mix, which made quite a sticky dough, but without it, I couldn't incorporate all the flour. These blobs of dough don't change shape as they bake - any crags or outcrops of dough will still be there after baking, so don't expect uniformity unless you shape the dough beforehand. My rock cakes - I made 14 from the dough - baked in 15 minutes, the shortest time suggested.

To enhance the expected lebkuchen flavour I drizzled the buns with a very dark chocolate (85%), but I think this was too bitter as the rock cakes themselves weren't very sweet. In fact, the other suggestion of a lemon glacé icing might have been nicer as it would have added a sharp note to lift and brighten the flavour. Don't get me wrong, these little cakes were dense, dark and delicious, and full of the spicy flavours of autumn and winter, but the flavour overwhelmed the chocolate I used, and the addition of a lighter flavour would have been an improvement. 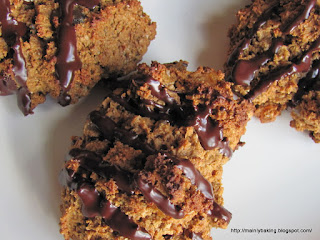 As for the flavours of lebkuchen - well, just about, but FB felt that the ginger was the overriding flavour, whereas ginger has been more muted in the lebkuchen we've eaten. I think these would also have been good baked as smaller cakes and perhaps half dipped in chocolate, but then I suppose I might just as well look out a lebkuchen recipe as do that! All in all - a quick bake packed with spicy flavour, although I think children might prefer a less sophisticated rock cake - perhaps the basic recipe Dan gives, enriched with a little spice and dried fruit.

I think FB would have preferred the lebkuchen flavours in a lighter cake, so I've got more work to do there, but this recipe has given me an idea of the flavours to look for in my search for a recipe to bake or adapt.
Posted by Suelle at 08:42

Your rock cakes looks delish and will go well with a cup of tea. May I ask what is lebkucke? x

Lebkuchen are spicy, chewy cookies somewhere between a cookie and a cake in texture. They are similar to gingerbread in flavour but have other spices in them too, and are often covered in chocolate. In the UK they are usually sold around Christmas time, but I think the origins are from central europe.

How good do they look, and I can imagine the flavour of these would put me in a proper Christmas like frame of mind ;0)

I saw this recipe too in Saturday's 'G' and was intrigued, never having actually baked any rock cakes! Yours look great and it's so nice to read your helpful comments and tips...I may well give these a go now!

Oooh, they look great. I love the idea of lebkuchen flavoured cakes so I'll look forward to seeing if you manage to find a lighter cake recipe with the flavours.

I like the sound of the flavours a lot. Funnily enough one of the nicest rock cakes I've had in recent years was topped with a lemon icing.