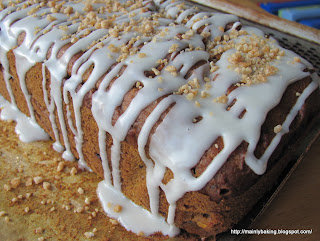 I say this every year, but I'm still going to repeat myself - I love the flavours of Autumn and the heavier, more comforting style of  baking more than any other time of year. Fresh autumn produce is still in abundance, and can be used to great effect with spices, citrus fruit and chocolate for a while longer, until winter brings reliance on stored and preserved fruit and nuts.

The use of fresh autumn produce was the thought behind the choice of pumpkin for this month's We Should Cocoa challenge, and I could have bought a pumpkin and made my own pumpkin purée, but for baking I find the tins of purée much more reliable. For those less averse to risk, Hungryhinny, this month's We Should Cocoa host, explains how to make pumpkin purée and pumpkin pie spice mix, in this post. 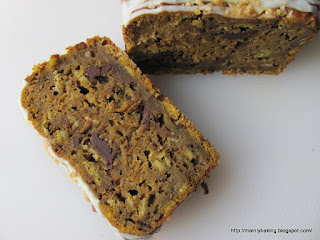 Last year, I remember trying to find a recipe using both pumpkin and maple syrup, which is another of my favourite autumn flavours, and not being successful, but I had more luck this year and, after adding chocolate into the search, eventually settled on this recipe for a non-yeast bread containing all three. After seeing the outcome, I decided to drop the word 'bread' from the title as the loaf was nothing like bread in texture.

I followed the batter recipe closely but substituted 2 teaspoons of cinnamon for the pumkin pie spice, as I've come to realise that it is only that particular combination of spices which makes me dislike pumpkin pie so much! I may have added more chocolate too, as I used a 100g bar of plain 74% chocolate, and I think half a cup of chocolate chips would be around 80g - but you can't have too much chocolate really, can you? 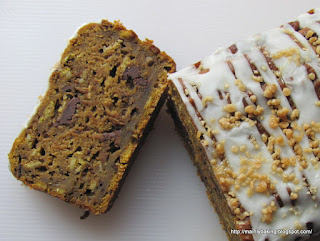 When it came to icing the loaf, I made a maple glacé icing, with icing sugar, two teaspoons of lemon juice, two tablepoons of maple syrup and water to mix to a thick pouring consistency. After drizzling the cake with this I sprinkled over some maple sugar crystals - a foodie souvenir of our Canadian holiday a few years ago. I took a photo quickly at this stage, in case the crystals dissolved into the icing, but fortunately they didn't, so the photographs after cutting the cake still show the topping. Phew!

The flavour of this cake was terrific, but the texture wasn't the best. It was slightly too moist - the photos of the cut cake show a dense layer at the bottom which doesn't look properly baked, even though a tester came out clean at the end of the baking time. Fortunately this moistness didn't make the cake too dense and chewy - it was lighter than it looks! I think this might have been better baked as muffins, as suggested in the recipe, or even as a more shallow traybake cut into fingers. I'm not sure that the oats added anything to the flavour or the texture - they stayed as small chewy pieces in the crumb. I wonder if the recipe originally had nuts in it, and someone substituted the oats - I certainly think chopped pecans or walnuts would have been nicer. 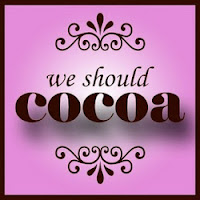 We Should Cocoa is a monthly baking challenge set up by Choclette at Chocolate Log Blog and Chele at Chocolate Teapot. The idea is to make a chocolate product containing that month's chosen ingredient or cooking method. This month, the guest host, hungryhinny, has chosen 'pumpkin', and will be publishing a round up of entries at the end of the month.
Posted by Suelle at 23:04

just so dense and fabulous... I love pumpkin for this!... so many wonderful recipes for pumpkin loaf and yours is amazing!

It looks really good, even with the problems you mention!

Maple syrup is definitely another great autumnal ingredient and I can imagine it goes well with the pumpkin and cinnamon.

I think pumpkin puree generally makes for a more dense and moist texture - but I use both those words as compliments and your loaf looks great to me!

I couldn't agree more about Autumn being the season for bakers and this recipe epitomizes all that is great about the Autumn!

Lovely combination of flavours, Suelle! I've never tried pumpkin and maple syrup together before, let alone with chocolate thrown in as well! :)

Pumpkin and maple syrup does sound like a really good combination. I too love the transition into autumn baking - moving away from fresh fruits to all of the warming spices and just a little chill in the air to make them more enjoyable. I do appreciate the way you discuss exactly what you thought of the recipe and the result - it's so much more helpful than just a 'this was wonderful' type post!

I like the sound of this combination of flavours a lot. Delicious, I'd say. I definitely think I'd go for the pecans or walnuts.

Wow - this is very definitely a great autumn recipe. I've always steered clear of baking with pumpkin for some reason, I really must fix that as this looks lovely.

This looks delicious - I love the moist texture and the flavours are great!