I'm used to getting promotional emails, asking me to take part in competitions, add my blog to other sites, give space to aspiring writers and so on, or offering books or sample ingredients. Most of these are rejected, as I don't want to change the nature of my blog - I write for my own satisfaction, not to gain recognition, make money or further a career (mine or anyone elses!). Occasionally I'm offered a book or a baking ingredient which I think I can use, without compromising that point of view - in the case of books, I always make it clear that I will give an honest opinion, whether it be positive or not so enthusiastic. If I accept a book, I will always try to find a recipe which I can make, so as to get a real feel for how well the book is written and how good the cook is. This is a review of one of the books which has tempted me recently! 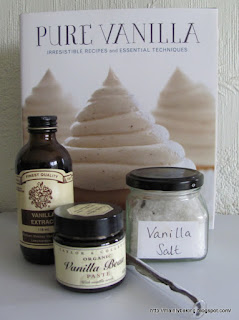 'Pure Vanilla - irresitible recipes and essential techniques' by Shauna Sever is about to be published in the UK. Shauna has already published a book called  Marshmallow Madness!, and writes a blog called A Piece of Cake. As well as a wide range of recipes covering everything from breakfast to evening cocktails, this book covers the history and production of vanilla, and looks at the characteristics of vanilla pods grown in various regions around the world.

It was fascinating reading and sent me to the kitchen to discover the origins of my vanilla products. My pods, produced by Ndali, come from Uganda, so have a "sweet, winey, raisinlike fragrance and flavour ..... perfect for rich desserts, especially ones containing chocolate" (so that's OK then!). The organic vanilla bean paste was from an Australian company, so may have been produced in  Papua New Guinea from Tahitian Vanilla. The bottle of vanilla extract, from one of the leading brands, doesn't state the origins of the beans at all.

Reading about how difficult it is to produce a vanilla bean, and how long the subsequent processing takes, makes it easier to understand why vanilla is one of the most expensive spices on the market, second only to saffron.

After the comprehensive introduction to all aspects of vanilla we come to the recipes. They are not all illustrated, which is always a disappointment, but those that are have beautiful photographs by Leigh Beisch.  It can't have been easy to photograph food which is mostly in shades of white, but  Leigh has produced some stunning photographs which make all the dishes look very appetising.

In many of the recipes, Shauna uses more than one form of vanilla to produce layers of flavour which are not in competition with other strong flavours. This will probably surprise most cooks, who tend to use vanilla as a background note to other flavours and not as the main feature. As the author is American, the recipes are written in cup measurements, which can be off putting to UK cooks, although cup measures are widely available. I was interested to see that white chocolate is often used to add a vanilla flavour, as I've often said that this is about the only real use for white chocolate! 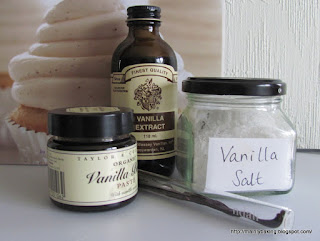 Most of the recipes are for sweet dishes, although some savoury uses for vanilla are mentioned, including the vanilla salt you can see in my photographs. I intend to use it to top some salted vanilla chip oatmeal cookies, but it can be used to season meat, vegetables or salads too. It's going to take a week for my vanilla salt (a mix of the seeds(caviar) of half a vanilla pod with half a cup of sea salt) to mature, so I'll be writing a review of that recipe separately!

I was surprised that it was initially quite difficult to actually find recipes which I wanted to make straight away. I wasn't really interested in either breakfast foods (although many could double as desserts), drinks or candies and confections which ruled out three of the six recipe chapters. In the other chapters, covering cakes and pies,  cookies and bars, and custards and creams, some of the recipes seemed  quite complicated, expensive (16 egg whites!) or used ingredients not easily obtained in the UK (marshmallow creme!). Some of the recipes just weren't suitable for the sort of cooking I'm doing at the moment, needing the right occasion to serve them up to a crowd. However, there are enough recipes which I would like to make, when the time is right, to keep me interested in the book, and any cook past the beginnners stage would find some of the more difficult recipes appealing and challenging.

All in all, this is a book which would be a good addition to any cook's library and which challenges our perception that vanilla is synonymous with plain and ordinary!

Great review and a book i think i would be pretty interested in as vanilla is one of my all time fave flavours. Sounds like it is worth the read alone.

Suelle, thank you for your objective and unbiased review of this book. It sounds very interesting!

Oooh this book sounds interesting. I've never thought of using vanilla as the main flavour in a cake. I'll have to pencil this in, in my to buy list. x

Well that's funny that we should both publish a review by Shauna on the same day. Vanilla salt sounds intriguing and makes an interesting change to vanilla sugar, which I have permanently on the go. Ndali vanilla is the only one that is fairtrade, so using these has got to be a good thing. I have the recipe for marshmallow creme in my book so can always give it to you if you'd like it - it uses egg whites.

It does sound like a very interesting book - I love vanilla as a flavour in its own right and like the idea of layering the vanilla flavour too. I wonder whether I'd find enough use for this book - my baking tends to be plain(er) cakes rather than desserts etc. Although having recipes in cups is definitely a turn-off for me.