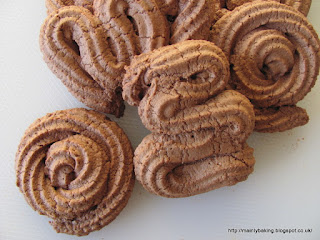 After seemingly months with none of Dan's weekly recipes in the Guardian newspaper inspiring me to immediate action, along come two in quick succession.

After the Lime Marble Cake, comes this recipe for Chestnut and Chocolate Cookies  from last week's supplement on Christmas cooking, and the first thing I'm going to say is that it shows that the Guardian photographer is a professional, and that whoever made that batch of cookies is better at piping than I am! I'm afraid that a lot of my attempts at piping 'long zigzags' looked like something usually found on pavements, and there was no way my photography skills could make them look attractive! I realised halfway through piping what they were going to look like and tried a few circles, which worked out much better.

However, what these cookies lacked in appearance they make up for in flavour and texture. The crisp exterior gives way to a soft, moist, melt-in-the-mouth centre that is really rich in deep chocolate flavour. The recipe made twelve cookies, the way I piped them, and eating two of them really felt like a chocolate overload - which is not something I get to say often! I wouldn't recognise any of the flavour as chestnut, but I think it helped develop the glorious flavour and wonderful texture. 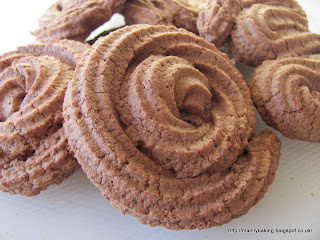 The cookies weren't difficult to make, but piping the fairly stiff dough made me realise that I need to update my piping equipment. The heat and pressure of my hands melted the butter in the dough, which seeped through my fabric piping bag and made my hands greasy. Has anyone tried the new silicone piping bags which are available now?

I've been asked to make these again for FB to take to a Chrismas party at work. I think I'll pipe them all as smaller circles and pop something like a slice of marron glacé, or even a half of glacé cherry, into the centre to make them look more attractive.

The theme for this months Tea Time Treats, in the run-up to Christmas, is Chocolate, so I'm entering these indulgent cookies to this blogging event. They are the sort of cookies which would be a great addition to any tea-table, but especially so at Christmas when something is needed to counteract the potential overdose of dried fruit in Christmas cake, mincepies and stollen (much as I love them all!). The full rules for Tea Time Treats, a monthly challenge to produce goodies for the tea-table, can be found here. TTT is hosted alternately by Karen from Lavender and Lovage, and Kate from What Kate Baked, and it was Kate who set this challenge, and has the unenviable task of producing the round-up of entries at a very busy time of year. Good luck with that, Kate!
Posted by Suelle at 11:17

I think they look great! I am totally impressed by your piping skills.

I think they look lovely. Its shame you couldn't taste the chestnut but the texture sounds great

What a fabulous Christmas combination...love the chestnut puree in these...I imagine they taste delicious! A roll of disposable piping bags is always good but obviously not so eco-friendly. I had the same problem piping Viennese Whirls...took some strength! :-)

I spotted these too Suelle and the page was immediately ripped out from the magazine! I'm glad they tasted as good as they sounded on paper. Thank you very much for entering these into TTT! And I tend to use silicone bags which I've found to be really good.

Nothing worse than spending ages creating in the kitchen for it to end up looking like something you find on the bottom of your shoe! I had that recently when piping some coffee buttercream on cupcakes. Ended up scraping it all off and starting again.... Actually I think your biscuits look rather nice and exactly the same as the picture in the Guardian. I love the idea of adding a marron glace.

Teehee - your post has made me giggle. Fab idea and such great flavour combo for the festive period too. I think they look great.

I ripped the page out too. Yours look great Suelle. I use a fabric piping bag which I can wash, which belonged to my Mum. Can't get on with the disposable ones - I make such a mess with them! Love the idea of a marron glace in the centre of the biscuits - very Christmassy.

Lovely - chocolate and chestnut is a delicious flavour, and piped biscuits always look so elegant!