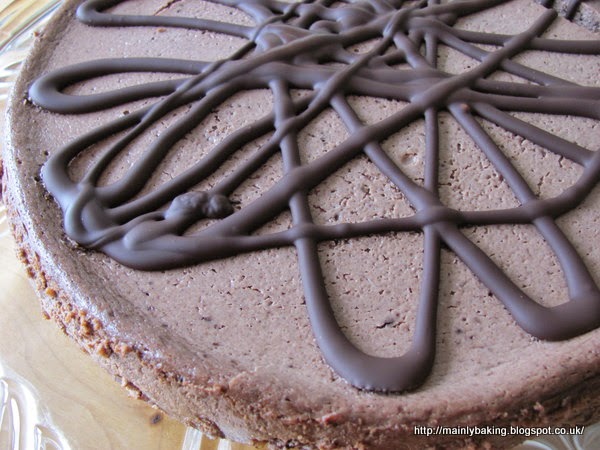 Easter wouldn't be Easter, in this household, without chocolate. Not Easter Eggs though - our children quickly caught on that you didn't get much chocolate for your money in an Easter Egg, so our tradition became a Terry's chocolate orange (or something similar) and a chocolate dessert for the weekend. Now that they are adults we've stopped buying chocolate presents, but the tradition of a chocolate dessert lingers on.

I decided on a baked cheesecake because it's fairly light on added sugar, compared to some of the desserts I could have chosen. I picked this recipe from Good Food, because it sounded quite light (despite some of the reviews claiming it was too rich!). The recipe uses cocoa and relatively small amount of plain chocolate to get a good flavour, rather than a lot of chocolate.

As usual, I only used the recipe as a guide to the correct quantities for the cheesecake mixture. I introduced a hint of nuts by adding finely chopped toasted hazelnuts to the biscuit base, and Amaretto liqueur to the cheesecake mix instead of a coffee liqueur. I also used plain chocolate instead of one with coffee flavour. 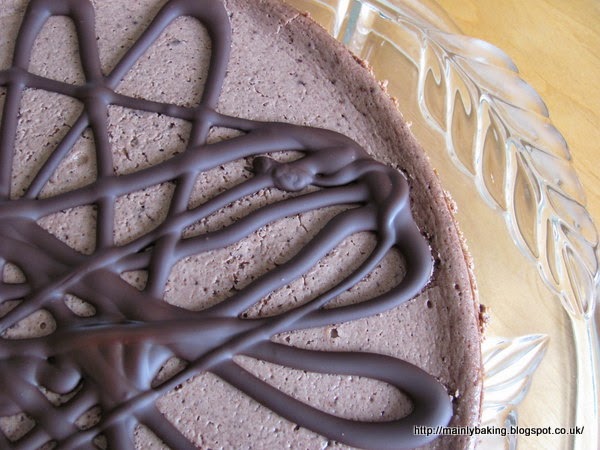 The base was made from 170g of chocolate and oat biscuits from IKEA, 50g toasted hazelnuts and 60g butter. I reduced the butter a little from the usual 50% of the weight of biscuit because I wasn't sure how absorbent the biscuits would be, and I didn't want the base to be too heavy - I prefer a slightly crumbly base rather than one which is dense and crisp. I followed the recipe for the cheesecake mixture as far as quantities of ingredients were concerned, just making the changes I've already mentioned.

I was rather concerned about how liquid my cheesecake mixture was - the recipe said to smooth the top after pouring it onto the base, but my mixture flowed like custard and certainly didn't need any help from me to become smooth and level. Perhaps because of this, the cheesecake took a little longer to cook than stated in the recipe. It also cracked badly, with one deep crack going right down to the base (which explains why there's no photograph of the whole cheesecake!). When cold, I decorated the top with a drizzle of plain chocolate, rather than the cream and chocolate sauce suggested in the recipe. I thought it better to serve cream as an optional extra, rather than force everyone to eat some. 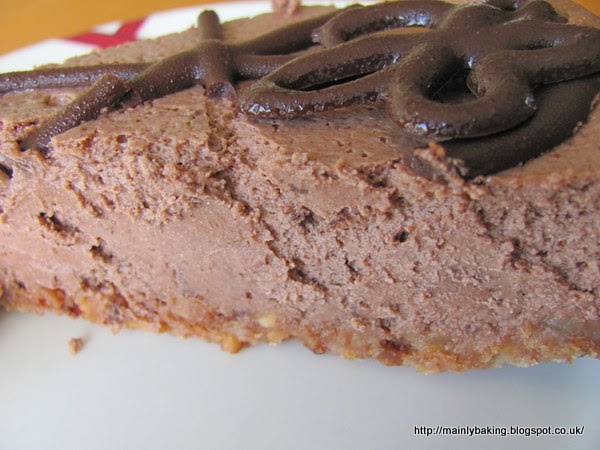 Although I'd expected this cheesecake to be light, it was very different in texture to what I had hoped for. It was more like a set cheesecake or a mousse than other baked cheesecakes I've made. It still tasted good though, which is the main consideration. The hint of nuttiness was just right, and the chocolate flavour was strong enough without being too rich at the end of a meal.

I didn't really manage to get any good photographs after the cheesecake was cut. By the following morning the remnants were a bit worse for wear  - the chocolate topping was a bit weepy, and the cheesecake was crumbly to cut straight from the fridge. I think this bottom photo shows the texture quite well, despite all that.

I'm entering this cheesecake into the April 'Simply Eggcellent' link-up set by Dom (of Belleau Kitchen); with due consideration for our priorities at Easter, his theme for this month is chocolate.

I love a properly dense baked cheesecake, but I have to say, your description of the mousse-like texture sounds very good to me!

my grandma used to always bring us a chocolate orange at Easter instead of an egg!... so much more chocolate for your pennies!... a gorgeous chocolate cheesecake, so pretty and so thick, which is always a good sign in my book. Thanks for entering into Simple Eggcellent x

That does look more like a mousse but I do find the texture of cheesecakes can sometimes be a bit too dense for my liking. Despite any cracking it does look very inviting to me.

I prefer a mousse type cheesecake rather than a solid one. This looks very moreish, and the decoration is very pretty.