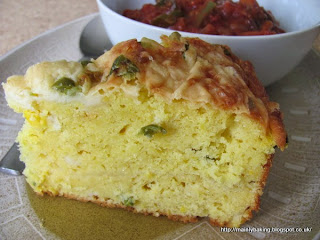 I love the AlphaBakes challenge, where we are asked to cook something using a randomly chosen letter of the alphabet, as either the starting letter of a principle ingredient (eg B for bacon), or as part of the name of the dish (eg B for Battenburg Cake). Admittedly, some letters of the alphabet prove more difficult than others, but that's all part of the fun.

Last time the letter Q came around I made a cake using quinoa, which had a fairly unpleasant texture and didn't go on my list of things worth making again; this time I intended to play it safer with a quiche. Except every time I suggested quiche for dinner, my husband vetoed the idea, so I had to think again. Quark seemed the next best idea, and while searching for recipes I came across this cornbread recipe from The Fabulous Baker Brothers. 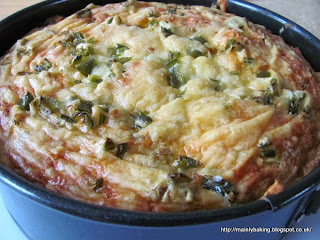 This is a luxury version of cornbread, compared to recipes I've tried before. It contains lots of cheese, sweetcorn kernels, onion and jalapeno peppers for flavour, and uses quark instead of the sour cream or buttermilk more usually found in cornbread recipes.

This was a straightforward recipe to follow, but my batter was very dry and I needed to add a few tablespoons of milk to give a stiff dropping consistency. The cooked cornbread was quite dry and crumbly, so it wouldn't have hurt to make the batter a little sloppier. The cornbread also took a lot longer to cook than the 40 minutes the recipe suggested - I think mine was in the oven for a touch over an hour! 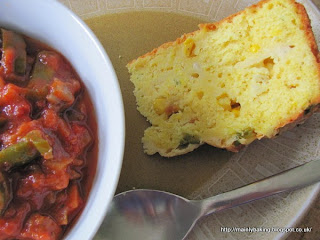 We both really liked this - it was very cheesey, and well spiced with the jalapenos, which I had chopped quite finely. Most cornbread recipes contain a proportion of wheat flour, which I think lightens the sponge texture; this one was all cornmeal, and also contained coarsely puréed sweetcorn kernels, so it was quite dense. It definitely needed more liquid in the batter though, to reduce the crumbliness a little.

We ate the cornbread, still warm, with a spicy ratatouille. The following night we ate it with a pork and bean chilli, but after two meals I'd only used half the cornbread, so I had to freeze the rest. I hope it doesn't become even more crumbly in the freezer.

This cornbread also fits the brief for Dom's Simply Eggcellent challenge over at Belleau Kitchen. This month he wanted our savoury recipes using eggs. While eggs are not the principle ingredient of a cornbread, it's almost impossible to make any sort of cake without eggs, so I think it's OK to submit this recipe. 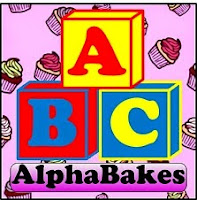 AlphaBakes is co-hosted by Ros, at The More Than Occasional Baker and Caroline, at Caroline Makes. This month's challenge, using the letter Q, is hosted by Ros, who will be posting a round-up of entries at the end of the month.
Posted by Suelle at 15:50

I discovered the wonders of cornbread last year. isn't it just such an incredible thing? So rich and wholesome. I love yours, it looks a glorious colour x

oh and of course, thanks for entering Simply Eggcellent x

I bet the leftovers would be very tasty in a savoury bread and butter pudding.

I'll remember that idea if it seems too crumbly when it defrosts, Alicia!

That looks so tasty and I love the flecks of chilli in it. I can imagine eating this warm for breakfast too

I love cornbread and this version with quark sounds deliciou and healthier. Thanks for entering AlphaBakes.