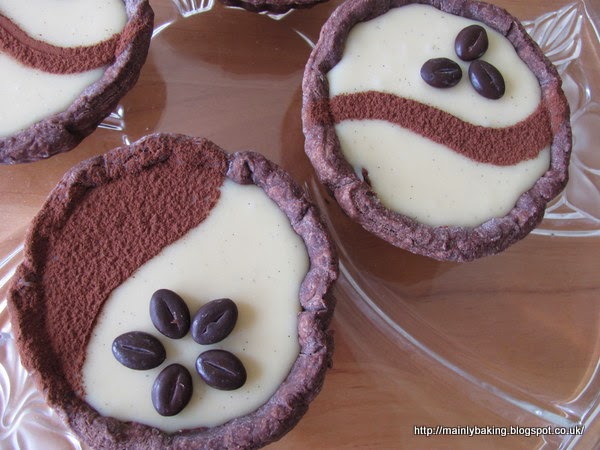 These chocolate tarts with Nutella and white chocolate/vanilla ganache filling were made our Bank Holiday dessert, but also fit the bill for for this month's We Should Cocoa Challenge. Karen, at Lavender and Lovage, is the guest host for the challenge started by Choclette at Tin and Thyme (formerly Chocolate Log Blog) and has asked us to use vanilla and chocolate together.

I decided to make extra chocolate pastry when making these ganache filled tarts, and used it to make smaller tarts filled with a disc of marzipan and a chocolate frangipane topping. 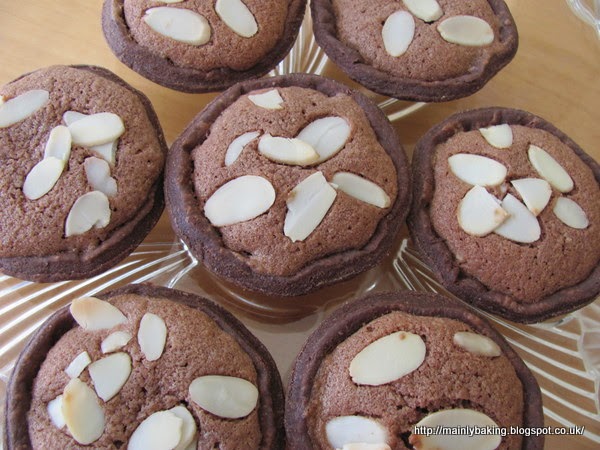 The recipes for both were just cobbled together as I went along, and I didn't take careful notes, but here's more or less what happened:

I made an unsweetened shortcrust pastry, from 270g plain flour, 30g cocoa, 75g butter and 75g lard. After rubbing the fats into the flour and cocoa, I added 1 teaspoon of instant coffee dissolved in a tablespoon of hot water, followed by enough cold water to make a firm dough. After resting in the fridge, I lined 12 jam tart moulds and four 9cm diameter individual tart moulds with pastry, and baked blind. 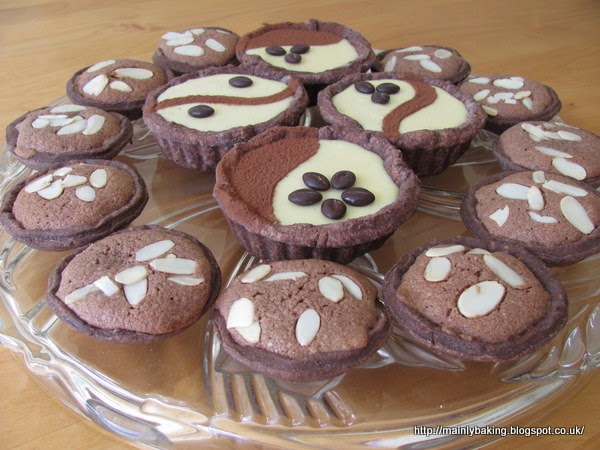 I originally intended just to fill the larger tart cases with white chocolate ganache but thought this might not have quite enough flavour, so before pouring in the ganache I spread a tablespoon of Nutella over the base of the pastry. I then chilled the cases for 10 minutes, so that the ganache didn't disturb the Nutella when it was poured on. The ganache was made by heating 125ml of double cream until just at boiling point, then stirring in 170g of good quality white chocolate and a teaspoon of vanilla bean paste with seeds. I allowed this to cool a little before pouring into the pastry cases, then cooled to room temperature before refrigerating. Once cold, the tarts were decorated with cocoa sifted through stencils, and chocolate coffee beans. I  brought the tarts up to room temperature before serving. 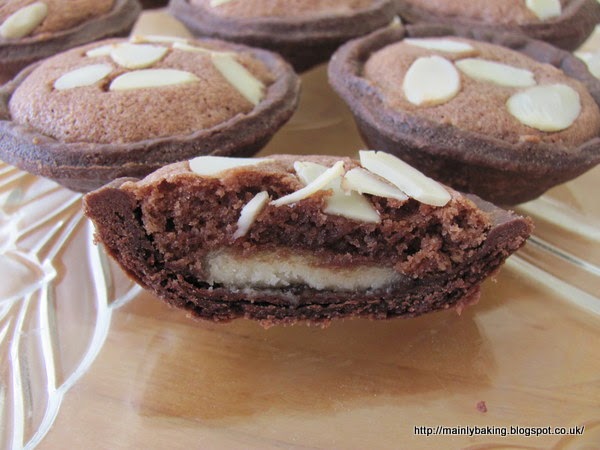 For the chocolate and marzipan tarts I put a quarter of a teaspoon of apricot jam into each case, with a small disc of marzipan (made from a pea-sized piece) on top. I made the frangipane mixture by beating together 40g ground almonds, 25g SR flour, a heaped teaspoon of cocoa, 50g caster sugar, 1 egg, 50g softened butter and a few drops of almond extract until smooth. This was just enough batter to put a heaped teaspoonful into each tart case. I sprinkled a few flaked almonds on top before baking at 160C until the frangipane felt solid - about 15 minutes. 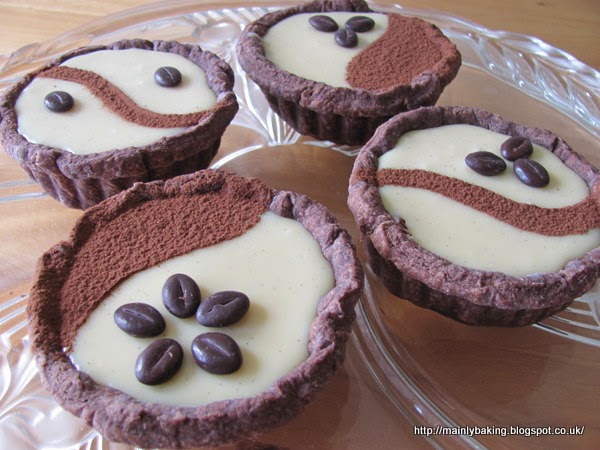 I was right about the white chocolate tarts needing more flavour than just vanilla. Adding the chocolate  hazelnut spread gave them just that bit more interest, but afterwards I wondered if peanut butter might have been even better, as it would have counteracted the sweetness of the ganache too. 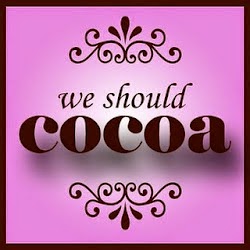 Those ganache tarts have such a professional finish! They look superb!

Maybe a spoonful of some sort of liqueur in the ganache?

Thanks, Alicia. There are lots of ways these could have been improved, but I needed the vanilla flavour to remain predominant for the WSC challenge. I wouldn't usually use white chocolate - IMO it's just a vehicle for vanilla flavour.

I love the chocolate pastry. Both fillings sound amazing, I wouldn't know which to choose. Love the decoration, very Ying & Yang. Looks so professional. Just beautiful

Great looking tarts, especially the ones with the ganache - mmmm! They do look very professional.

Mmm, your tarts look marvellous!
If you fancy linking up to a new patisserie linky and blog challenge, you would be very welcome. It is called Perfecting Patisserie and is on my blog BakingQueen74.

Ooh, those white chocolate tarts are stunning Suelle. I admire your deft use of the stencils. I find it very hard to get such clean finish - not sure I've actually managed it yet. In terms of taste, I think I'd go for the marzipan and chocolate tarts, but I think I might manage the former ;-) Thank you for another great entry into We Should Cocoa.