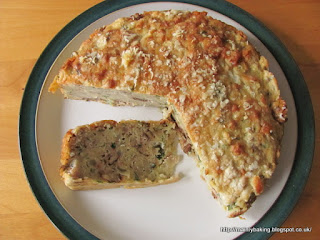 Last week, the weather suddenly changed from the usual non-descript British summer to a heatwave. A real heatwave too - the temperatures here in East Anglia got over 32C on the hottest day, and there were several days in succession when the temperature was in the high 20s. This played havoc with my eating plans, as we only wanted salad for most of the week, and left me with, amongst other things, a huge cauliflower which wasn't going to last much longer. I needed to make something which would be suitable for hot or cold meals, depending on how the weather changed.

This cauliflower cake was inspired by Yottam Ottolenghi's recipe from Plenty More, which I enjoyed a lot when I made it last year. This time, about the only thing I took from his recipe was the ratio of eggs to flour, and the cooking temperature, but I would never have thought of making this without trying his recipe first. 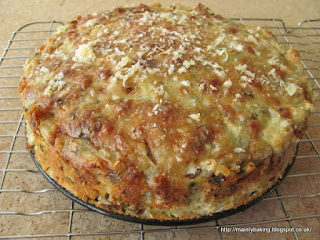 Method
Cook the cauliflower in boiling salted water, for about 8 minutes, until just tender. Drain well and cool.
Preheat the oven to 180C (160C fan), and line a 20cm diameter springform tin with baking parchment (to save heartache later, line the sides as well as the base, even if your tin is non-stick). 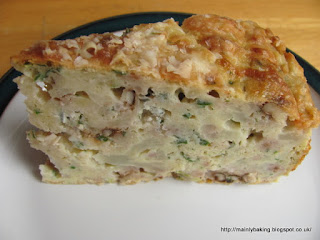 Sift the flour and baking powder into a large bowl, add three of the eggs and mix to a smooth paste, then mix in the other 4 eggs and the sunflower oil. Crumble in the blue cheese, then stir in the walnuts, spring onions, parsley, salt and pepper.
Gently fold in the cooked cauliflower, being careful not to break up the florets too much.
Tip the mixture into the prepared baking tin, trying to get the cauliflower evenly distributed and level in the tin.
Sprinkle the parmesan over the surface, then bake for about 55 minutes, until golden and firm. (If you use a larger tin, as in Ottolenghi's recipe, it takes about 45 minutes to cook, but I liked the idea of a deeper cake)
Best eaten at room temperature, or just a little warmer, but however you intend to eat it, leave it in the tin to cool. 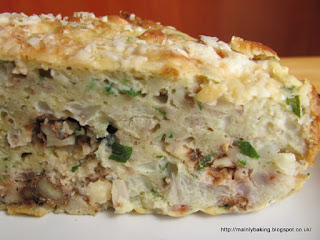 This is more like a tortilla or frittata in texture, than a cake, but the addition of flour and baking powder makes it both lighter and more robust - ideal for food you might want to stand up to the rigours of transporting to a picnic, for example. The addition of blue cheese and walnuts added two strong flavours to the cauliflower, and the walnuts gave a welcome crunch to the texture, The finely chopped spring onions and parsley added attractive flecks of colour to an otherwise plain looking dish.

Over at Belleau Kitchen, this month's theme for Dom's Simply Eggcellent challenge is 'Eggs in the Morning'. While this cauliflower cake might not be most people's idea of a tasty breakfast, it would certainly be good on a brunch menu.

this one sounds worth my while, I am always looking for portable food that holds together to eat on the run.
Over from the linky.

What a great way to use up a cauliflower. Sounds delicious.

Wow that looks amazing! A cross between cake and frittata. Id love a big slice of this

a brilliant idea! It looks amazing and I adore cauliflower so this would be ideal for me and yes... so perfect for brunch... thanks so much for linking to Simply Eggcellent x