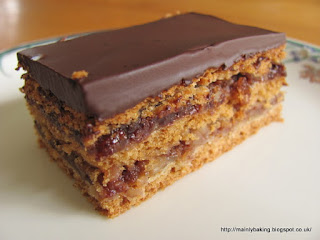 I know it seems contradictory to say that I don't like layer cakes but that I love layered bars or slices, but there is one big difference between the two. Layer cakes are often assembled with fillings that aren't essential to the flavour of the cake, but just pile on the fat and sugar; with layered slices, the filling between the layers of dough is often where the main flavour lies, and the whole thing is assembled before baking is complete (with the exception of a frosting, if added). With layered slices, the base or layers of biscuit act as a carrier for the main flavour ingredients. 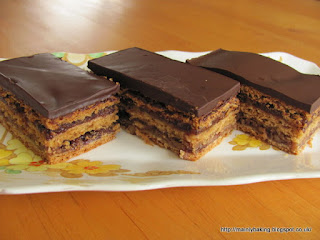 These Gerbeaud Slices (scroll down for a photo of the real thing!) are a typical example - the layers of dough are simple, almost unsweetened, flavoured only with a little lemon zest, whereas all the flavour and sweetness is in the two layers of walnut and apricot jam filling and the chocolate on top. This recipe originated in Hungary, from the famous House of Gerbeaud in Budapest, which now comprises a patisserie, a bistro and a smarter restaurant. The pastry is typical of Eastern European baking, with it's use of yeasted dough, nuts and fruit preserves. There are several, slightly different, recipes online, as you'd expect from something that has become a traditional cake of the country, and has passed from a patisserie into household use. I eventually chose this one, from the Good Things website, because of the detailed instructions and the fact that it was very similar to the recipe in a Hungarian cookery book I have. 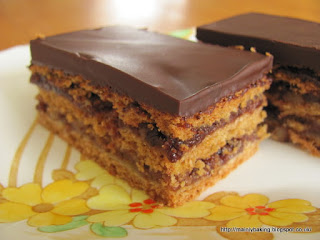 I made half the recipe from the Good Things site, as there were only two of us to eat it. This meant I had to adjust the recipe a little - I still added a whole egg yolk (who wants to divide an egg yolk in half?) and used a little less liquid in the dough to compensate. I used natural yogurt instead of sour cream, and found that I didn't need to add more than 1 tablespoon to get a nice soft dough. I baked the slice in a 20cm square cake tin, which was perhaps a fraction too large;  the dough had to be rolled quite thinly to fit the tin, but the rest of the ingredients seemed in the right proportions. 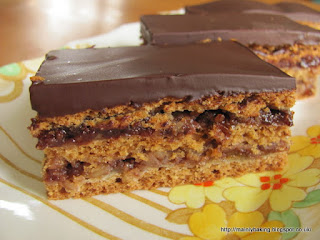 When I first discovered the recipe it was difficult to imagine what the layers of dough were going to be like after baking. The dough contained yeast, but wasn't left to rise as long as most yeast doughs, and also contained a little bicarbonate of soda and acidic sour cream which would also act as a raising agent. Was I making bread or biscuit? The dough had the elasticity of bread dough, which helped when fitting it to the baking tin, but after baking the layers were more like a soft, but firm, biscuit with an open texture.

I thought these bars were really delicious; the sweet nutty filling was balanced by the plainer biscuit layers and both were complimented by the chocolate topping. My husband wasn't as impressed - he said he could only taste the chocolate on top! I suppose that's probably an example of the fact that people's taste buds makes their eating experiences unique!

These bars would look very impressive as part of a special tea, especially when the edges are trimmed off before cutting the main part of the slice into bars. Although they were a little more fiddly to make than some bars, the dough was very easy to work with and the finished slices really made the effort seem worthwhile.

I'm sending these to Caroline Makes, for the Formula 1 Foods Challenge - food inspired by each round of the Formula 1 Grand Prix. I'm a little early with my entry, as the Hungarian Grand Prix isn't until the end of the month, but who knows, I might find something else Hungarian to bake by then!

I think this sounds wonderful!

you're so right about the layers in a layer cake. I'd never thought of it like that... these bars look fantastic!

Wow, these look so delicious. Haven't heard of them before, but yet another of your recipes to try.

These are so pretty! Thanks for sharing that recipe - I'm going to have to try it.

These look amazing - I can't believe I've never heard of these before! Thanks for sharing them with Formula 1 Foods.. have you got a recipe in mind for Belgium?

I need to get on with some research for Belgium, Caroline. I didn't realise the summer break was over quite so soon!