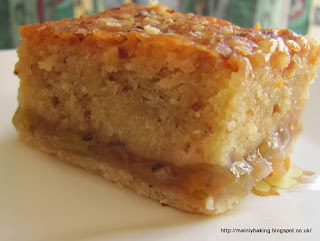 I've been taking part in the Formula 1 Foods challenge over at Caroline Makes. The idea is to make a dish inspired by the country in which each round of the F1 Grand Prix races take place. This weekend, the race takes place here in Great Britain, so it was relatively easy to find an ingredient which, to me, seemed  to represent the best of seasonal British food.

I chose to bake with gooseberries, rather than go for a typically British recipe, such as Battenburg Cake, or Maids of Honour, for two reasons. The first was that it was impossible to make a choice between all the 'British' recipes I have; the second was that gooseberries seem the most British of all the summer fruits available. They don't feature much in the cookery of any other country, as far as I can find out, even though they can be grown in most of Northern Europe. At the moment they seem out of favour with even British cooks, perhaps because they are difficult to harvest, which makes them expensive to grow commercially, as well as fiddly to prepare once you've got them. I was surprised recently to hear Raymond Blanc say that he had never cooked with them before making a gooseberry cheesecake for the TV series 'Kew on a Plate'. 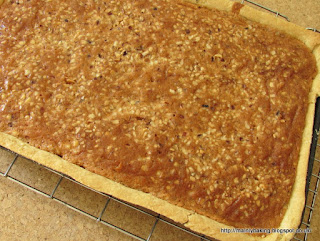 Having decided on gooseberries, I looked around for a new recipe to try. Because they aren't a commonly used fruit, there aren't many recipe variations around - pies, crumbles and streusel topped cakes seem the most popular use, but all the recipes are very similar. I was very pleased to find this recipe for Gooseberry and Hazelnut Slices on the BBC Good Food website, as pairing gooseberries and hazelnuts is new to me, and it got over a major problem with cake baking with fresh fruit in hot weather, namely that nothing keeps for more than a couple of days, without refrigeration, before going mouldy. This recipe cooks the gooseberries with a lot of sugar, to make a purée with an almost jam-like texture. I hoped this would hold the mould at bay for long enough for us to finish the cake, as I really dislike the texture of cakes that have been refrigerated.

There were three stages to the recipe, which made it quite a trial on one of the hottest days of the year (so far)! I decided to make my own shortcrust pastry, which increased the work load, then the fruit had to be cooked and a sponge cake topping made to go on top of the pastry and fruit. 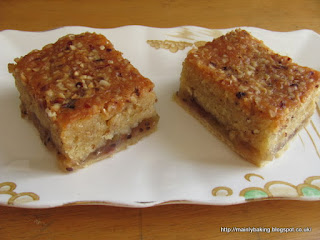 I followed the recipe exactly, but rather than ice the cake to finish it off, I sprinkled 25g of chopped toasted hazelnuts over the cake batter before baking, then brushed the cooked cake with 3 tablespoons of elderflower syrup to glaze it, while it was still hot.

This recipe was not without it's problems. The first was that the cake batter took far longer to cook than stated. After 25 minutes it was dark brown on top but still very liquid underneath, so I covered it, reduced the temperature by 20C and cooked it for longer, testing every 7 minutes or so. It took another 20 minutes before I was satisfied that the cake was cooked through - that's a big discrepancy!

The second problem was evident when cutting the cake - the layer of gooseberry purée hadn't been thickened enough, so that it oozed out from under the cake layer, which in turn made the cake slide about on the base. This made the squares of cake difficult to serve and they had to be eaten with a fork rather than just fingers. I guess the amount of juice in gooseberries varies with factors such as variety and ripeness, so if I make this again, I will thicken the fruit by eye, rather than just using the amount of cornflour specified in the recipe.

It's certainly a recipe worth making again. The pairing of gooseberries and hazelnuts was delicious, and the gooseberries were still tangy and fresh tasting. The recipe is reminiscent of a Bakewell Tart, but using fresh fruit, rather than jam, elevates things to the next level.
Posted by Suelle at 15:12

I like the sound of that, even if the recipe did need a bit of tweaking.

I've been offered a large batch of gooseberries from a colleague's garden and had no idea what to do with them other than making a gooseberry fool. Pairing it wit hazelnuts sounds like a good idea and gooseberries are very British indeed!

Check out my other recipes using gooseberries, if you're stuck for ideas. They also freeze well, so you don't need to use them all at once.

I love the combination of gooseberries and hazelnuts. This sounds delicious.

An unusual recipe and two things I wouldn't have thought of pairing but a very British ingredient! Thanks for sharing with Formula 1 Foods.