(note to self - check you have enough dried cranberries in stock before you decide to make an apple, walnut and cranberry cake!)

Another cake using the lovely autumnal flavours of orchard fruits and nuts, but again, one that is plain and brown to look at and not very easy to photograph well.

My starting point was this recipe on the Bramley Apple website; my motivation was to use up three Bramley apples which had been lingering for too long in the fridge. I made quite a lot of changes to the recipe, to make the walnuts more of a feature, and to adapt to what was in my store cupboard, so will write out the list of ingredients I used. I had the remains of a bottle of walnut oil brought back from France to finish up, and I wanted to use dried cranberries instead of sultanas and add some nuts to the cake batter too. I also felt that a nutty streusel topping might be nicer than a lot more walnuts embedded into the top of the cake - not sure I was right about it, but more about that later!

As it turned out, I only had 70g of dried cranberries, so used those and 50g dried cherries, cut in half, to make up the 120g needed. I didn't have any 00 pasta flour either, but a bit of research told me that basic plain flour would be a good enough substitute. 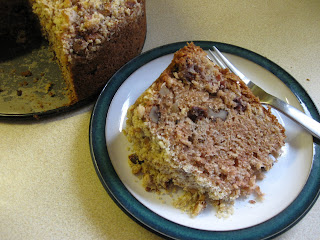 To make the topping - rub the butter into the flour, then stir in the sugar and nuts.

To make the cake - follow the recipe in the link, using the cranberries and cherries instead of sultanas, and adding the chopped walnuts to the batter. Sprinkle the streusel topping over the cake before baking, instead of using the topping in the recipe. I found that the cake was cooked in 70 minutes - quite a bit less than the time given in the recipe.

Given the amount of grated apple in the recipe, I was surprised by how light and dry this cake turned out to be. I wouldn't have minded a denser, moister cake, as I wanted to serve it as a dessert, but it was still very good. The amount of topping I made was too much, and too dry - half the quantitiy would have been enough, but using a higher proportion of butter too. The suggested topping of chopped nuts mixed with demerara sugar might have been even better!
Posted by Suelle at 08:56

Looks divine. I often start a recipe only to discover halfway through that I'm missing a key ingredient!

Thanks, Hilary. It's hard to make these sort of cakes look attractive, but the taste makes up for the plain looks.

It is surprising that it wasn't moist with all that apple. I would have expected it to be almost soggy!

It surprised me too, Foodycat - it's often difficult to decide whether recipes weigh fresh fruit before or after peeling and coring. I weighed mine before, so might have been a bit light on the amount of apple required. The batter was very stiff before the apple was mixed in, so another egg might be an improvement too.