With a batch of brownies available if all else failed, today I had time to work on a recipe that I'm trying to perfect. Since seeing this fabulous photo of Lemon Burst Cookies last month, I'm determined to make something similar from scratch. For one thing, I don't even know whether the cake mixes we get here in the UK are the same as American ones, for another, I always have the basic ingredients available for baking, but buying a cake mix involves remembering to put it on the shopping list and thirdly, I've never seen a cake mix that doesn't have chemicals and cheap fats in, which I don't use when baking from scratch.

Reading the labels on cake mix boxes (online) wasn't as helpful as I'd hoped, as many boxes contain frostings too, but the ingredients listings aren't separated out. So as a starting point, I decided to assume that a 18oz cake mix would contain equal weights of SR flour and sugar, like many cakes. I decided to use 20% cornflour to give a more tender texture. Then, I added all the additions used in the recipe in the link, plus some natural yellow colour. This made a very liquid batter which need more flour to make a cookie dough. Even then the dough spread too far, too fast - the balls of dough didn't even hold their shape on the baking sheet. The resulting cookies were very tasty, and had a nice cakey texture, although they were too sweet, so I knew I was on the right track.

Today, I looked through my Cookies recipe book to find something that looked as if it had the right texture after baking, and compare it with my first attempt. this recipe used a creamed mix of almost equal amounts of butter and sugar with double the quantitiy of flour and an egg yolk mixed in to bind. I added lemon zest, lemon extract and natural colour instead of the flavours in the recipe. I again used about 20% cornflour to keep it tender and added a little bicarbonate of soda to ensure a cakey texture. The recipe I chose gave a raw dough that was too dry, but adding a little lemon juice soon rectified that. The cookies held their shape and baked to a good texture, but the raw dough balls didn't 'hold' the icing sugar coating, and it was all absorbed during cooking. I sprinkled on icing sugar after baking but it doesn't give the same effect. I'm not sure how to proceed from this point, as what I made were very good cookies in their own right - they just didn't look correct.

I also decided to make some homemade Fig Rolls (Fig Newtons), which my husband had suggested, to use up a bag of dried figs. I used this recipe, although I didn't have any wholemeal flour, so used all white. I also used the leftover egg white from the lemon cookie making, plus a little water, instead of egg yolks. I was happy doing this as several recipes I looked at used egg white to mix the cookie dough. The resulting fig rolls were pretty good, but with the benefit of hindsight, I rolled the dough too thin. I also think both the dough and the fig filling would be improved with some additional flavouring - orange zest, perhaps or some cinnamon. So again, this is a work in progress, although not as far to go as with the lemon cookies! 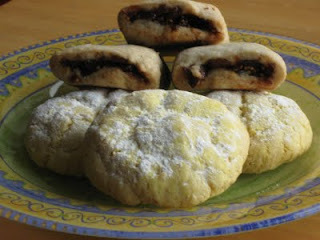 Mmmm - Iove fig roles, but would never have thought of making them myself - what a great idea. I might cheat though and wait for you to come up with the perfect ones first!

Choclette - they certainly look as if they need some more work, don't they? My husband really liked them as they are though, so even though I think some flavouring would be an improvement, I'm not sure I'll change much apart from rolling the pastry a little thicker, and possibly chilling them before cutting to keep them neater.

Chocolate in the filling would be an interesting development step - chocolate and dates together is a lovely combination, but I don't recall ever trying figs and chocolate. Chocolate, finely chopped stem ginger and figs?

These look delicious! This is my first visit to your blog - it's lovely. I shall be back :) Love Lucie x
http://cookingatmarystow.blogspot.com/

Lucie - thanks for your comments. Looking at your blog, we seem to have the same sort of taste in baking, although I'm hampered by a son who needs regular chocolate! LOL! I must add you to my reading list.

Chocolate, stem ginger and figs - how can it fail? Will have to put this on my list of things to try. If I manage it, shall of course attribute it to you. You may well get there first though.

Having taken a look at the lemon burst cookies, I can see why you're trying so hard to recreate them! I shall watch future developments with interest.
Fig rolls is another great idea - I used to love them but haven't had any for years. And I've never even tried home-made ones. That really should change!