These Malted Milk and Chocolate Chip Cookies would be labelled a failure, and not even mentioned, if it wasn't for the fact that the flavour is so good. Now I have another recipe that I need to perfect!
I'd planned to make a cake, but other things intervened and I had to bake something quickly to keep the cake tin filled. Cookies seemed ideal, and I'd recently found this recipe for Malted Milk Wholewheat Cookies. I didn't have any wholewheat flour, nor time to chill the cookies, so did a general search online for similar recipes which used white flour and didn't chill the dough before baking. I settled on this one as I had all the ingredients (some used condensed milk) and decided to make half a batch, just to see us through the day.
The only thing I planned to do differently was double the malted milk powder to intensify the flavour. I've no idea how, or if, this affected the dough, but I needed to add another 50g of flour to the half quantities to even get a dough which looked like cookie dough. Then they spread a really long way in the oven and took twice as long to bake as the recipe suggested. As they spread so thin they were quite crisp when cold - not the sort of chewy cookie I'd been expecting, but the flavour make this a concept worth perfecting, as I said before. 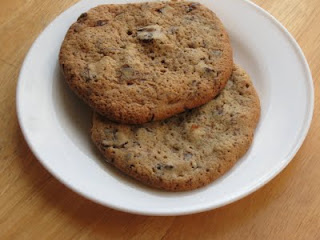 The occasional thin, crisp biscuit is nice! Not a failure, just not what you were going for.