I really expected to love this cake. Everywhere I looked at it online, the reviews are fantastic - I used the recipe from Epicurious and of the 70 reviews there, only a few people didn't like the cake, and that could be put down to personal tastes being different. Every blog I read thought it was great too. 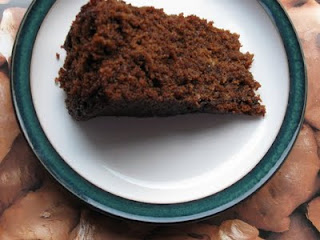 
The flavour was fine - no problems with that; in fact, the idea of adding black pepper is something I'll take back to my usual gingerbread recipes - the buzz from that was lovely. However, I didn't like the texture. If it's possible to say it about a cake, it was too light and airy in texture, while the sides were crisp and crunchy. For me this wasn't a pleasant contrast, and it made the cake difficult to cut too. Perhaps it's because I'm used to dark gingerbreads being dense and moist; if so it's something that is so ingrained that it's not going to be easy to rid myself of the prejudice.
It would probably have made a lovely dessert, cooked in a pyrex or earthenware dish, so that the edges didn't crisp, and then served warm with cream or custard, but I'm afraid it's not a cake I will be trying again.
The only change I made to the recipe was to use black treacle instead of molasses, and replace 1/3 of the quantity with golden syrup, as I'm not sure black treacle can be described as having a mild flavour. A couple of notes if you want to make it - my cake had a few little patches of paler crumb. I think this is down to the action of the baking soda, as it's happened before when I've used recipes which dissolve the soda in hot water then stir it into the batter. I'm not sure if it's down to not enough mixing, or something else! Also the mixture of wet ingredients is very liquid, which makes it difficult to incorporate the flour at the end. Better to sift it over the surface of the wet ingredients and mix in gradually, rather than dump it in, in two or three parts, as I did!

Observation, made the next day - to be absolutely fair, the crisp edges seem to have softened a bit with time, but the cake is still too light in texture for my tastes.

I'm with you - I prefer a really dense, moist gingerbread! The black pepper addition sounds good though.