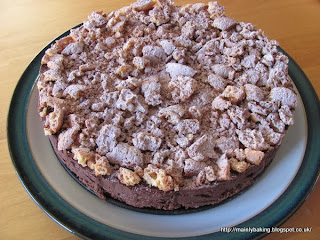 Christmas tradition in this house dictates that there is always one chocolate dessert. It dates back to when the children were smaller and didn't like the dried fruit in Christmas puddings, cake and mince pies. To be honest, they still don't like much of the traditional stuff, although FB will eat mince pies!

This dessert (based on a recipe from Wicked Chocolate by Jane Suthering) was made from a layer of chocolate truffle mixture set on a genoise sponge base and topped with crushed Amaretti biscuits. The sponge cake was sprinkled with coffee and Amaretto liqueur to add to the flavour. 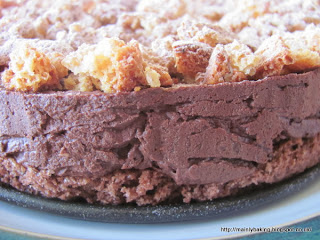 The sponge base was made by beating 2 eggs and 55g caster sugar together until light and fluffy, then 30g plain flour, 2 tablespoons cocoa and 1 tablespoon cornflour were sifted together and folded in, followed by 25g melted butter. The batter was baked in a 22 cm tin, then cooled and trimmed to fit a 20cm tin. After the sponge was fitted into the base of a 20cm springform tin, it was sprinkled with 2 tablespoons each of strong coffee and Amaretto liqueur

The truffle layer was made by creaming 115g unsalted butter and 115g caster sugar together, then beating in 75g cocoa, 3 egg yolks and 200g crème fraiche. Finally a mixture of  85g plain chocolate melted with 2 tablespoons of milk was stirred in. This was spooned over the base and spread level. The top was sprinkled with 100g crushed crisp Amaretti biscuits before the cake was chilled overnight. 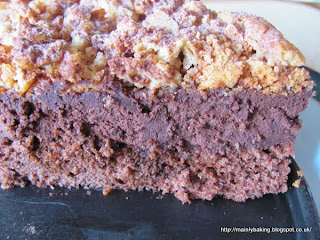 The cake was brought to room temperature before serving, and dusted with a mix of cocoa and icing sugar.

This was a sinfully rich chocolate dessert, with layers of contrasting textures and flavours. The Amaretti biscuits stayed crisp (despite my fears that they would go soggy on top of the truffle),  the sponge was soft and light, and in between was a rich, dense truffle layer. The almond flavoured topping and the coffee and Amaretto flavoured base  both helped to lighten the taste of pure chocolate from the truffle layer, a little. 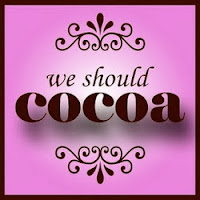 This dessert is my entry to December's We Should Cocoa challenge. This month, Choclette from Chocolate Log Blog, set the challenge of using chocolate and alcohol together - just right for the festive season. The rules for We Should cocoa are best explained by the host, so have a look here if you think you would like to join in, in future.

Now that sounds like chocolate dessert fit for any Christmas table. Amaretto is my favourite tipple and amaretti biscuits are rather good too. Hope you all had an enjoyable Christmas and thanks for submitting this luscious dish to WSC.

that just looks so stunning, what a fabulous tradition to have... would really enjoy a slice of that right now x

This cake looks fabulous and I 100% support your chocolate dessert tradition. It's one we have adopted too it seems. Mum and I favour roulade while Dad has Christmas pudding. I don't think we could go back to just one dessert now if we tried!