I've wanted to make this cake for years - ever since I bought Annie Bell's book 'Gorgeous Cakes' - but every Christmas something has happened to stop me making it. This year nothing interfered, not even the thought that I'd got for too much food already, and a cake wasn't really even necessary! 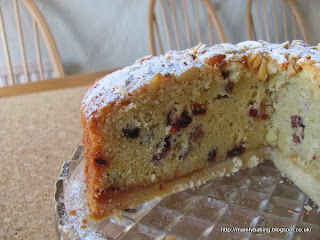 The cake consists of a shortbread layer, a madeira style cake flavoured with rum and dried fruit, and sandwiched between the two are layers of marzipan and marmalade. All this is topped of with a sprinkling of flaked almonds and pine nuts. It's always sounded a really delicious cake to me, perfect for those who don't like or want a traditional rich fruit cake at this time of year.

It was a delicious cake, but not perfect! One fault was mine, but if I was going to bake it again, I would make some changes to produce something even more delicious. My fault was being too enthusiastic with my new Kenwood Chef mixer, and believing the recipe book, which said that beating the eggs into the creamed sugar and butter at maximum speed would lessen the likelihood of curdling! I now know that you still need to go the traditional route of adding a little flour with each egg! The bad curdling resulted in a slightly stodgy texture, rather than the sponge-like appearance I had been expecting. 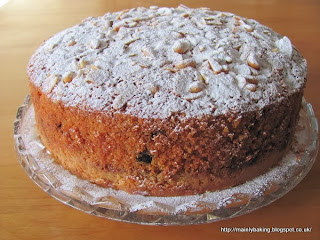 The recipe's problems, to my taste, were two-fold - firstly, there was not enough marzipan (although you could taste the marzipan, you couldn't really see it as a separate layer). I think the layer either needs to be thicker or it needs to be made from a better quality marzipan. I usually use Anton Berg marzipan which is 60% almonds, but it has disappeared off the shelves this year, possibly due to the much publicised almond shortage. Using a standard supermarket marzipan which was only 25% almonds might explain why it seemed to melt into the cake mixture. I guess a good alternative would be a homemade marzipan, although most of the recipes I've seen are less than 50% almonds when the sugar and binder are factored in

The second problem was not enough orange flavour. I think the cake needs at least the zest of an orange in the cake batter, and I would probably replace the rum with orange juice, as the rum flavour wasn't very noticeable. I used sultanas and dried cranberries in the cake, and these could be plumped up first in orange juice, if you wanted to keep the rum.

Apart from those problems, it was a really good cake. Having a crisp shortbread layer, and the marzipan only at the bottom of the cake, and pieces of nuts only at the top, made it interesting to eat, as there was a variety of textures and flavours depending on where you took a bite. Definitely a good alternative to a rich fruit cake - even FB, who avoids most dried fruit, liked it! 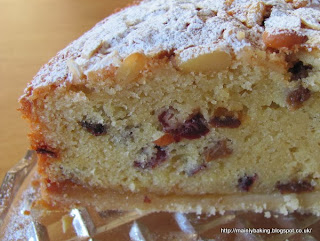 A few recipe details, to make a cake in a deep 20cm tin with a loose bottom - the shortbread layer was made from 90g butter, 40g golden caster sugar, 75g plain flour and 50g ground almonds. This was pressed into the cake tin and chilled. A circle made from 200g marzipan, spread with 75g coarse-cut marmalade was placed on top of the shortbread before the cake batter was added. The cake batter was made from 225g golden caster sugar and 225g unsalted butter, creamed together. 4 whole eggs and one egg yolk were added next, followed by 90mls rum. 225g SR flour plus 1 teaspoon baking powder was folded in, then 75g each of sultanas and dried cranberries (raisins in the original recipe) was stirred in gently. After this was transferred to the cake tin and spread evenly, 20g each of flaked almonds and pine nuts were scattered on top. The cake took around 70 minutes to bake at 170C, and was cooled in the tin. 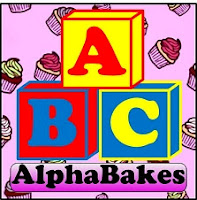 AlphaBakes, a monthly baking challenge based on a randomly chosen letter of the alphabet is running out of easy letters. Providentially, December's letter is X, and X-mas is considered an acceptable choice of word to use as part of the name of what we produce. Hence I am entering this as my alternative X-mas cake! AlphaBakes is jointly hosted by Caroline of Caroline Makes, and Ros of The More Than Occasional Baker. The rules can be found here, and Ros is the host this month. There will be a festive round up at the end of the month, although I wonder if there will be any entries that found an alternative to X-mas!

That does indeed sound like a very good cake! The changes you would make next time seem like good ones.

Ooh that looks delicious.
I own the same book so I shall go and investigate the recipe immediately.

This sounds like one Brian would really like (I of course, never eat cake, hehe) and I would love to try it out. I have found that you can buy kg bags of ground almonds in the Italian deli, I am not quite sure where they come from and I am experimenting with using some and vac packing the rest. I hadn't realised there was an almond shortage, I thought the emptiness on the regular supermarket shelves was due to some tv baking show or other.I once made a blonde christmas cake but it didn't have that scrummy bottom layer which makes it look really excellent!

Shortbread AND cake, rum AND marzipan?! What great combinations! Love the sound of this, maybe you could up the marzipan flavour by adding some more chopped up into the cake batter? Definitely seems like a good alternative for anyone who doesn't like traditional christmas cake though :)

A perfectly festive cake and I'm sure with a little tweaking it will be brilliant. Thanks for entering AlphaBakes.