This is the last of my festive baking; after this there are bought Christmas goodies which must be eaten before I do any more baking.

I based this Mincemeat Streusel Slice on this recipe from Mary Berry, shown on this year's Great British Bake Off Christmas Special. The only part of the recipe I took exactly was the streusel topping - I used my own sweet shortcrust pastry recipe and used 500g bought mincemeat with 100g chopped apricots and a grated eating apple added to it. 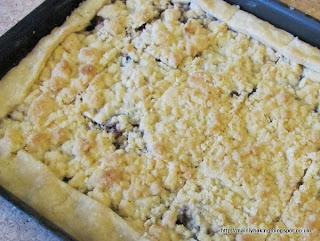 Once I had lined the baking tray and spread the mincemeat over the pastry, I decided not to waste the excess pastry at the sides of the tin, so folded it down over the filling. This worked very well as it gave most of the slices a solid edge to hold onto after they were cut. 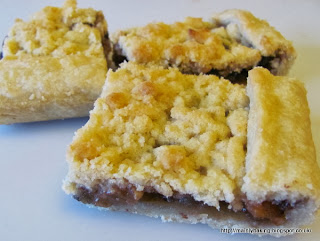 I liked Mary's recipe for the streusel topping - I often similar topping from Martha Stewart, I think, which first brought the tip of using melted butter to my attention. Using melted butter and bringing the ingredients together into a dough, for later crumbling, makes the topping less powdery. The semolina in this recipe adds a little extra crispness. I found that the streusel dough couldn't be grated as Mary suggested, but crumbling it evenly over the mincemeat was just as effective, and probably quicker than grating. 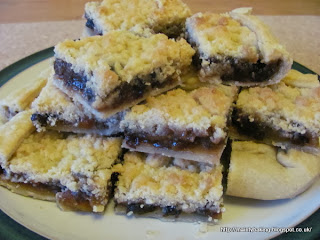 I liked her idea of grating the dough on top. As you say, it avoids the floury mix on top.

I've got this on my list to make this weekend. Yours looks very moreish. Happy New Year to you.

Happy New Year to you Suelle and your family, so lucky having all these wonderful cakes and bars to sample. Those look particularly delicious!

It doesn't seem so lucky now that we're trying to take off the weight which we gained in the last two weeks, Joanne! LOL!