After trying many different recipes for layered bars with a filling of jam or softened dried fruit, I think I've at last found the perfect recipe for the dough layers. This recipe for Date and Ginger Squares, from Sue Lawrence's book 'On Baking' uses an easy shortbread dough made from equal parts of SR flour and semolina, which makes a really crisp, but melt-in-the-mouth biscuit. I adapted the recipe slightly by adding a little lemon zest to the filling, and adding the stem ginger in pieces, rather than blending it with the rest of the filling. 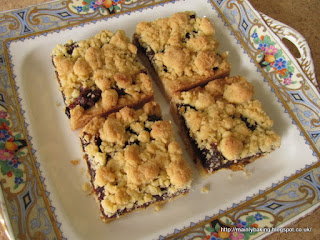 For the filling, place all the ingredients except the stem ginger into a small pan and simmer together, for about 10 minutes, until all the liquid is absorbed and the dates soft. Purée with a stick blender or in a food processor, then stir in the chopped stem ginger. 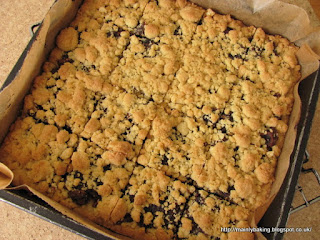 For the shortbread dough, melt the butter and sugar together on a gentle heat until the sugar has dissolved, then  tip it over the flour and semolina, and combine well. The mixture will be crumbly, not a smooth dough. Put 2/3 of this mixture into a 8" square shallow baking tin lined with baking parchment, spread evenly and press down firmly.

Spread the filling over the base, leaving a small margin around the edges. Crumble the rest of the  shortbread mixture over the filling, then press down lightly with the palm of your hand. There may still be a few gaps where the filling shows through, but this is fine!

Bake at 190C for 25 minutes, until the shortbread is golden brown. Cut into 16 squares as soon as the  tin comes out of the oven, but cool completely in the tin before trying to move the squares - they will be too fragile while still warm. 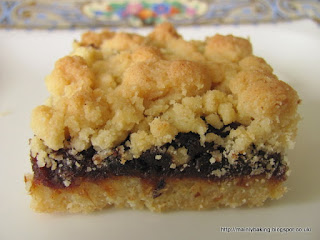 Although the biscuit dough for these squares was perfect, and the filling was very tasty, these squares didn't really live up to the name of 'Date and Ginger'. There certainly wasn't enough ginger in the recipe and I'm not sure the currants added anything to the taste experience. Next time I will try several things to increase the ginger flavour - more stem ginger, some ground ginger as well as cinnamon, and more ginger syrup instead of honey. I will also leave out the currants and increase the amount of dates.

I'll also be using the shortbread recipe in other types of bars - it would be interesting to see how the crisp biscuit stands up to using fresh fruit in the filling, which often produces a 'soggy bottom' result.

Like the sound of this and they look so good. Great to have another stand by recipe, but would be interesting to see how it works with fresh fruit. Keep us posted!