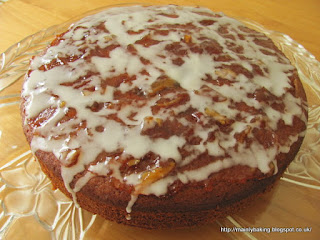 Opinions were divided about this cake. Although we both agreed that the cake crumb was too dry, I liked the subtle blend of orange (from marmalade) and mixed spice in the body of the cake. Hubby, on the other hand, didn't like much about the cake at all - he thought the marmalade glaze and glacé icing drizzle was the only redeeming feature.

I used this recipe from Waitrose's website, substituting mixed spice for the cinnamon and nutmeg used in the recipe. You can see from the proportion of flour to other ingredients that it's not supposed to be a rich cake, but a plain cake needn't be as dry as this was. I think, with a little more butter, and another egg in place of 50mls of the milk, this could be a very good cake. The aim would be to get the texture of a good Madeira cake - denser than a sponge cake but still tender and moist. If that could be achieved I think the flavour of the cake would seem much better. 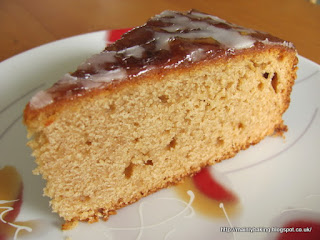 The cake didn't go to waste though; I roasted some rhubarb to serve with it and drizzled the slices with the cooking syrup from the rhubarb. With vanilla yogurt on the side, this made a tasty dessert. The spiced orange flavour complimented the rhubarb very well.
Posted by Suelle at 15:34

It's so frustrating when a cake doesn't quite turn out right. The recipes I have tried from the Waitrose website have all worked well but I see this only has three stars. For me it's a dilemma whether I try it again with subtle changes or just give it up as a bad job!
Still, most disappointing cakes can be reinvented as a pudding, yours sounds delicious!

You're right - it is a dilemma whether to tinker with a recipe or just forget it! Apart from a few family favourites, there are lots of good recipes I don't go back to, as I'm always looking for something new, so trying to perfect a bad recipe might be wasting too much time.

Shame it was rather dry, as it looks very tasty. Using as a dessert was a great idea.